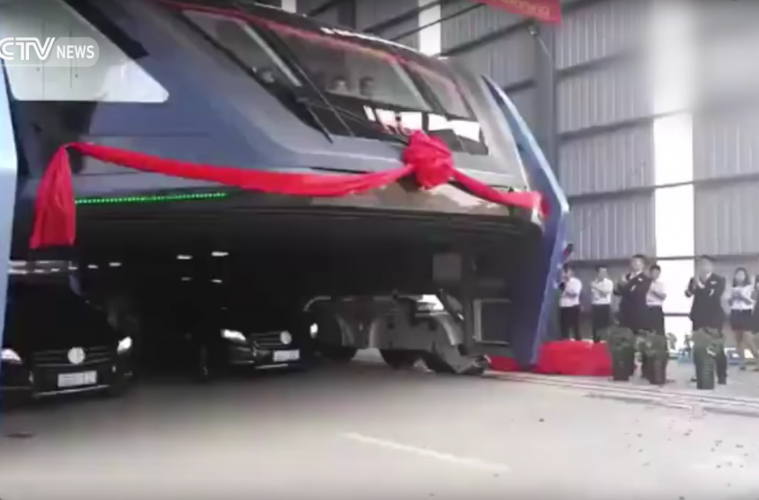 The bus glides over traffic whilst traffic flows underneath it

The electricity-powered Transit Elevated Bus (TEB) straddles the highway, sitting above two lanes, allowing traffic to pass underneath it. The vehicle is 22m long, 7.8m wide and 48m high, with a capacity of 300 metres.

The vehicle completed its first real life test by travelling 300m down a closed section of tarmac in Qinhuangdao, a seaside town 300km east of Beijing.

The concept was designed to help alleviate China’s traffic congestions by combining hybrid light-rail and a bus to transport large numbers of people whilst allowing traffic to flow underneath it, simultaneously.

The TEB concept is designed to help China alleviate some of its massive traffic problems. By combining two methods of transportation, the hybrid light-rail train and bus would transport large numbers of people inside its carriages while letting cars pass underneath.

The inside of the TEB is lined with seats along its side and curved sections, whilst handrails line the roof of the.

Whilst the concept completed its first test, it remains unclear if or when more TEBs will be deployed or how much it will cost the country.

Sceptics of the project expressed their concerns that the vehicle was too tall to go under bridges and too short for some vehicles to pass under, whilst being too heavy for many cities’ roads. Critics also cited the potential for traffic accidents.