8267 people are talking about it

A Facebook group entitled “Ban all asians from EDM festivals” has been spread around the social media site, sparking mixed responses.

Whilst the group itself only has 162 members, Anthony Santons Jr’s post about the group, calling for people to report the group, has garnered 1375 shares.

The “Ban all asians from EDM festivals” group not only implies that drug taking is a necessity of festivals, but also prides itself with on ensuring that the drugs are being taken “responsibly”… how noble!

“We all know that drugs and alcohol are a big part of the rave scene and its [sic] our duty to make sure that people are using them responsibly. However there is one group of individuals that cannot seem to handle their drugs and alcohol…”

Considering their group name, it is unsurprising that the “individuals” the group description is referring to are Asian. Lacking remorse, the description goes on to explain that all the people who die at festivals are Asian,

“Last year two individuals passed away at hard summer and this year we had three deaths. What do they all have in common? They are all ASIANS. Asians are notorious for getting fucked up at festivals. Its [sic] not their fault, it [sic] in their genes”

Fortunately, the group has an honourable solution,

“If we ban all the asians [sic] from festivals then we could potentially save countless lives over the years. Remember that every life is precious and if we can even save one life we have completed our goal.”

Anthony Santos Jr who shared the group to rally support in reporting it, said “we have no place for this. Everyone should be entitled to go to events… Since I can’t bitch slap him Bc [sic] he lives in Arizona I’ll use the power of social media”.

The post triggered a lot of controversy, causing 8627 people to talk about it. Unsurprisingly, many have taken offence to it.

Pada Vang said “I don’t go to raves but I find this disturbing…Just because the recent deaths were within the ethnicity of Asians, it doesn’t mean that Asians should be ban from EDM Festivals!”

Others have taken it with a pinch of salt.

Khy Whittaker said, “Its [sic] nothing but comedy to me because A) its [sic] mostly trolls and just plain ignorant
B) asians rarely get shit for anything so them being mad off this is just extra hilarious to me as a black male in this society, I wish this was all I had to be mad over”. Cristina Zulueta wrote, “Like lol, we do party hard tho!”

Sean Acosta said, “keep Asians out of festivals [sic] they’re killing the vibe with their bullshit Asian trains and being Fucking light weights overdosing all the fucking time. I literally saw nothing but Asians sitting on the fence of hard summer this year smh. Keep them out and we’ll probably be able to keep it in la. I’m going to hte icty council tomorrow to raise this point. 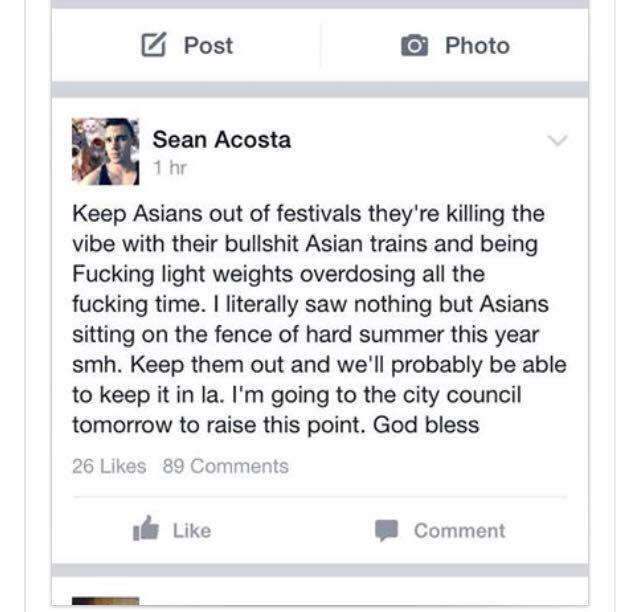 In response to Sean, journalist Jae-Ha Kim wrote, “Good luck with that, buddy. I do like the way he ends his post: “God bless.” Maybe that’s the new, “I’m not racist but…” And last, but not least, I hope that the families of the two young victims are able to get some closure. May the women rest in peace.”