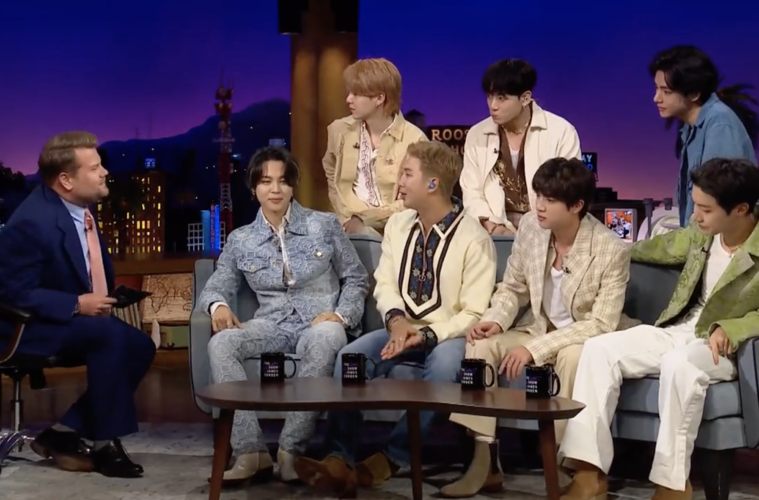 "I've never been on that side of the army before"

BTS have confronted James Corden about calling their fan base “15-year-old girls”.

Commenting on the “unusual” appearance by the Korean boy band during a segment for The Late Late Show host said, “The United Nations General Assembly kicked off this morning in New York City, and it started with some pretty unusual visitors… BTS were there. BTS visited the UN…”

“Although lots of people are saying why are BTS there, the world leaders have no choice but to take BTS seriously. BTS has one of the largest ARMY on the planet earth. Historic moment. It actually marks the first time that 15 year old girls everywhere found themselves wishing that they were Secretary General António Guterres.”

Corden’s comments triggered the BTS ARMY, who threw shade at the British host.

Appearing as guests on The Late Late Show, BTS weren’t shy about bringing up the incident with Corden.

Telling Corden that it was good to be back, Namjoon said he wanted to hear more about how the host “some hot water with ARMY.”

Keeling over in embarrassment, Corden replied, “we did two jokes which I didn’t think were offensive to anybody. You were kicking off the the UN summit with a performance and we said your fans were 15 year old girls which of course isn’t true because I’m 43 years old and I consider myself to be one of the biggest BTS fans on planet earth.”

“I’ve never been on that side of the army before,” Corden continued. “Someone’s just told me that they hope I die today which did feel extreme in response to what I thought were two quite harmless jokes which we never wanted to be at anyone’s expense.”

“We absolutely love you and we love the entire ARMY. I’ve seen them at their absolute best they when they are a true force for good, like they’ve supported charities that I support at home and they’re amazing. The prospect of doing anything that may have upset them – I didn’t enjoy that feeling.”

“We do appreciate your apology,” the group responded.

And now, the moment you’ve all been waiting for… Namjoon asks James about ~that~ joke 😬 #BTSxLateLate pic.twitter.com/9Anrdjz995