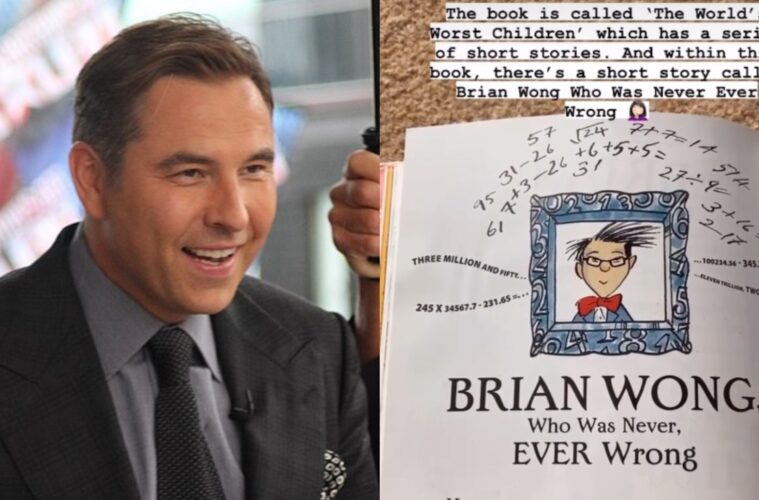 "Even just the way Brian has been illustrated. He wears glasses, he looks like a nerd, he's got small eyes... they're all harmful stereotypes"

A David Walliams story that the Asian community deemed to be racist has been pulled from his children’s book.

Titled ‘The World’s Worst Children’, the kid’s book is illustrated by Tony Ross and features short stories about naughty children.

In the collection of short stories, Walliams had written about a character called ‘Brian Wong’.

“Brian Wong who was never, EVER Wrong,” the story’s title reads. It then tells the tale of Brian, who exerts all the stereotypical Asian traits such as being good and maths and solitary in nature.

Earlier this year, Instagram user @chinesechippygirl exposed the author through her IG stories, showing the book to her followers.

“There are so many racists jokes on ESEA community with the surname Wong and associating it with wrong,” the Instagrammer said. “I don’t have enough time to go through what kind of jokes these are but if David Walliams would have done his research, he would have known this.”

Podcaster Georgie Ma recently highlighted the book again, slamming it for “normalising jokes on minorities from a young age”.

“Even just the way Brian has been illustrated. He wears glasses, he looks like a nerd, he’s got small eyes… they’re all harmful stereotypes,” she said.”

“The overall character plays on the model minority myth where Chinese people are nerdy, swotty and good at maths, we’re not confrontational and we’re high achievers.”

“It was just really disappointing to read about that. Personally for me, because I have a toddler, I don’t want her being absorbed in these stories where Chinese culture is misrepresented.”

After meeting Ma, the book’s publishers confirmed the story would be replaced.

“In consultation with our author and illustrator [Tony Ross] we can confirm that a new story will be written to replace ‘Brian Wong’ in future editions of The World’s Worst Children,” a statement from HarperCollins Children’s said.

“The update will be scheduled at the next reprint as part of an ongoing commitment to regularly reviewing content.”

In other news, Ji-Sung Park has told Manchester United supporters to stop singing a racist chant that refers to Koreans eating dog meat.