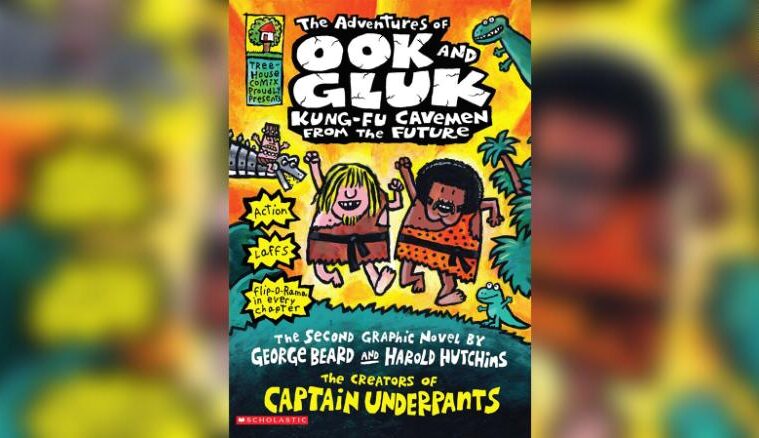 "It was and is wrong and harmful to my Asian readers, friends, and family, and to all Asian people"

A spinoff of the Captain Underpants series has been pulled due to “passive” racist stereotypes of Asians.

Publishers Scholastic announced that it halted distribution of The Adventures of Ook and Gluk: Kung-Fu Cavemen from the Future with the support of its author Dav Pilkey.

The 2010 graphic novel follows two “cavekids” Ook and Gluk in the fictional town of Caveland in 500,001 B.C. After being transported to the future, the duo befriend a martial arts instructor Master Wong who trains them in kung fu.

Billy Kim, a Korean-American father of two children, started a Change.org petition that highlighted numerous problems with the book’s portrayal of Asians. Instances include, “dashes for eyes for the Asian characters, stereotypical Chinese proverbs, and a storyline that has the Kung Fu master rescued by the non-Asian protagonists using their Kung Fu skills.”

Pilkey apologized days later in a letter posted to his YouTube channel.

“About ten years ago I created a book about a group of friends who save the world using Kung Fu and the principles found in Chinese philosophy. The Adventures of Ook and Gluk: Kung-Fu Cavemen from the Future was intended to showcase diversity, equality, and non-violent conflict resolution,” Pilkey wrote.

“I wanted to take this opportunity to publicly apologize for this. It was and is wrong and harmful to my Asian readers, friends, and family, and to all Asian people.”

Pilkey and his wife have pledged to donate advances from The Adventures of Ook and Gluk: Kung-Fu Cavemen from the Future to non-profit organizations that combat anti-Asian racism.

“I hope that you, my readers, will forgive me, and learn from my mistake that even unintentional and passive stereotypes and racism is harmful to everyone,” Pilkey wrote. “I apologize, and I pledge to do better.”

Scholastic also apologised for the book. “Together, we recognize that this book perpetuates passive racism,” Scholastic said in a statement. “We are deeply sorry for this serious mistake.”

It added that the book will be pulled from its websites and is seeking the return of all inventory.

“Throughout our 100 year history, we have learned that trust must be won every day by total vigilance,” the statement continued. “It is our duty and privilege to publish books with powerful and positive representations of our diverse society, and we will continue to strengthen our review processes as we seek to support all young readers.”

However, Kim said the move was too little too late. “While it is appreciated that they are pulling the book from retailers, this is not enough,” Kim wrote in the petition.

“The damage has been done. Every child who has read this book has been conditioned to accept this racist imagery as “okay” or even funny. It is this type of passive racism that has contributed to the continued hate and prejudice experienced by Asian Americans on a daily basis.”

Earlier this month, Dr Seuss book And to Think That I Saw It on Mulberry Street was pulled from publication due to anti-Asian depiction.