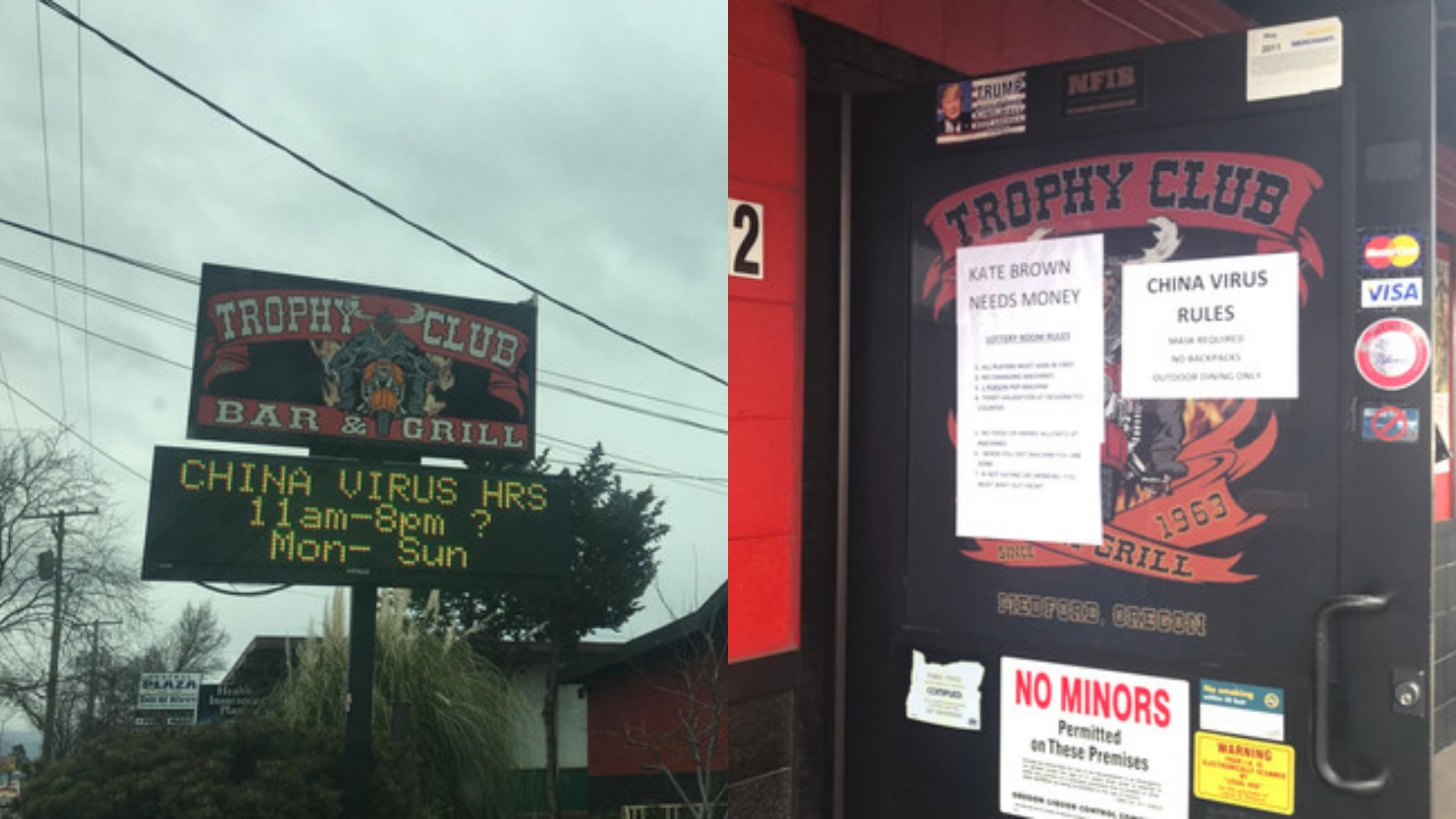 An Oregan bar has drawn criticism for using racist signs and for mocking a customer with a racist accent.

The Trophy Club Bar and Grill in Medford, Oregon had displayed a sign that read “China Virus Hrs 11am-8pm?”

“China Virus Rules” signs were displayed inside the bar and on the front door.

Although Trump has since stated that the virus is “not the fault of Asian Americans”, he came under fire for repeatedly referring to the virus as “Chinese” during his presidency.

Ken Narasaki, a fourth-generation Japanese American playwright and actor, said he contacted the bar about the signs but was mocked.

“I called to explain why that would be considered a racist sign, and the fact that its inspired a lot of anti-Asian hate violence, which spiked all through 2020, people have been beaten, a Japanese violinist was beaten so badly he might never be able to play the violin ever again, it’s no joke,” he said.

When attempting to explain the damage the sign could cause, the bar hung up on him.

Narasaki called the bar back but an employee mocked him with a a “sort of chop suey racist accent.”

Narasaki then posted a picture of the sign to social media, which spurred an influx of comments. Internet users then went to Yelp to review-bomb the bar.

“It’s bad for Medford, Medford needs more diversity, it would benefit from more diversity if they wanted to attract a large corporation, for instance, to have their headquarters here what company would move to a place that permits signs like that,” Narasaki said. “It is something that needs to be nipped in the bud.”

Yelp has since suspended reviews and comments on Trophy Club Bar’s page.

“This business recently received increased public attention resulting in an influx of people posting their views to this page, so we have temporarily disabled the ability to post here as we work to investigate the content,” Yelp said in an alert that shows up on the business’ Yelp page.

“While racism has no place on Yelp and we unequivocally reject racism in any form, all reviews on Yelp must reflect an actual first-hand consumer experience.”

In a written statement, Trophy Club said it has received death threats since the post went viral and claims it is not racist.

“We are not and never have been racist, nor have our employees. The sign was not intended to be racist, ” the statement read.

“It was to make light out of the situation we all have been going through for the past year. We apologize to whoever we offended. That was not our intention.”

The bar has removed its ‘China Virus Hours’ sign but “China Virus Rules” are still dotted around the inside.