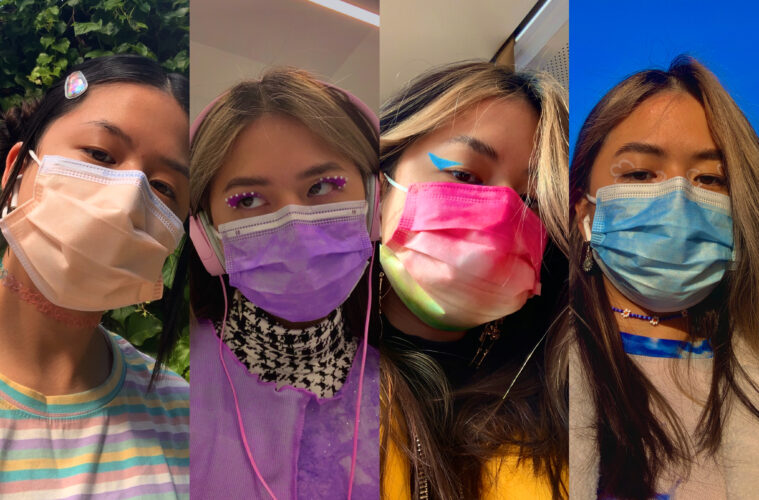 Collage and images by Evianne Suen. She often pairs her outfits and makeup with her mask to show that they don't have to be a hindrance, but an accessory.

FEATURE: ‘Western mask culture shock’ made me feel like a ‘bad Asian’ in the COVID-19 pandemic

How did I go from wearing a hazmat suit for 12 hours to hugging maskless friends in a crowded pub?

“If a maskless Karen stands within a metre of me in Tesco, I’m gonna cough like my lungs are about to fall out.”

This line earned my friends’ chuckles every time I announced it before leaving Hong Kong for London. I wore a 3M hazmat suit, face shield and pair of laboratory goggles throughout my 12-hour flight, and had stashes of alcohol wipes, surgical KF94 masks and plastic gloves at the ready.

To navigate the wilderness of London, where anti-mask advocates congregate and protest against saving lives, I had my trusty button-pressing device, bottles of disinfectant, “antivirus lanyards” to create an air bubble around your face, filters for my face coverings and a suitcase of surgical and reusable masks. I thought I had taken every precaution not to get Covid.

I found myself in a crowded pub on Old Street a month after the harrowing journey from Heathrow to my flat, which I spent eyeing my Uber driver dragging down his mask* to take sips of coffee. (For context, this was especially jarring when I had just landed from Hong Kong, where you must wear a mask indoors and outdoors. And yet,) I hugged mutually maskless friends sitting at six-person tables at two ends of the bar, whom I hadn’t seen in months, with only a sparing thought at the consequences.

When a friend in Hong Kong admonished me over a disappointed voice message, the full weight of my actions sunk into my conscience. How had just a month here turn me into a hypocrite, “bad Asian”, and irresponsible human being?

HOW TO WEAR A MASK PT.1 (bc your government doesn’t bother teaching you 🤡) #mask #masks #wearamask #howto #protectotherpeople #andyourself #savelives

It might have been an overreaction in retrospect, but it was the bridge to my realisation that herd mentality is dangerously and unconsciously effective. I manifested my homesickness in a yearning to see my friends again, which replaced the “mask culture shock” that plagued me when I landed. I had never felt so guilty about a hug, which was triggered by muscle memory and an atmosphere of momentary pre-Covid normality: crowded pub, familiar faces, sticky counters and incessant chatter. Besides, my friends who initiated the hug were clearly not as “Covid conscious”, so why should I be? It felt as if declining the hug would only further “out me” as a “hypochondriac”.

It was a fresh source of embarrassment, the same way “confessing my sins” over Whatsapp voice messages was. Hugging these people from all over the UK when I’m living with two vulnerable flatmates is reckless. If the same scenario had taken place outdoors in Hong Kong, we would’ve drawn dirty looks and strongly-worded Cantonese insults from people who think we’re tourists or uncaring international school kids.

“I remember seeing someone wearing a surgical mask upside down, the wire against their chin, and it was equivalent to watching my flatmate cook unwashed rice in a pot.”

I’ve been both people: one who considered taking and “exposing” photos of pedestrians traipsing around Hong Kong without a mask, and one who thinks “I might as well go for the hug/meal/party because if I have Covid, then ‘it is what it is’”. That weekend after the pub, it occurred to me that culture shock eventually fades and “assimilation” is inevitable.

It’s not bad to assimilate, such as branching out of my group of Hong Kong friends as a fresher, but it’s good to diagnose why and how you were shocked. Back in first year, I gravitated towards fellow Hongkongers for a sense of family after living abroad for the first time in my life. I verged on creating an exclusive social circle if I didn’t assimilate.

Covid-wise, “assimilation” has the added gravity of “life or death”. In Hong Kong, going outdoors without a mask was akin to leaving the house naked. I felt so much fear walking around London amongst people who didn’t wear a mask outdoors, ripped it off once they step out of a store, touched the outside of it then their belongings and only covered their nose. I remember seeing someone wearing a surgical mask upside down, the wire against their chin, and it was equivalent to watching my flatmate cook unwashed rice in a pot.

I still feel that same sense of fear and disgust because I don’t want to assimilate to being more cavalier with my “Covid security”. I’d rather be very safe than sorry, called a germaphobe than gamble with my life. (Also, being hygienic shouldn’t be shameful. For a country that’s so progressive about mental health, surely people should stigmatise cleanliness less.)

But “mask culture shock” also triggered my realisation that I was occasionally casually xenophobic when I was in Hong Kong: “of course it’s white/westernised people who think they’re invincible and that masks are oppressive”, “of course it’s white/westernised people who can opt out of wearing a mask because the rest of us make that possible for them”. These thoughts were always unchallenged back home.

The way I’ve found an equilibrium between the warring herd mentalities is by thinking of other people. I care less about myself getting Covid than passing it on to someone vulnerable, and this has nothing to do with culture, everything to do with moral responsibility. If an action as simple as wearing a mask—and it’s just that simple, it’s not a symbol of oppression—can spare someone’s life, why should it be a political statement?

Associating masks and being clean with “Asianness” is an unhelpful generalisation and othering that has to cease. I catch myself reasoning with people, “oh, I wear a mask because people in Hong Kong are very uptight about it, especially after SARS, it’s even a fashion thing in K-pop, it’s just how it is over there”. We’re now in a global pandemic. Having hand sanitisers in malls and wearing surgical masks to school when you have a cold shouldn’t be an Asian or “OCD” thing.

I’ve also noticed myself taking mental notes whenever my Hong Kong peers, who, after a month of living in London, have stopped wearing a mask outdoors, been reusing their surgical masks too many times or stuffing their masks into their bags without a case.

And to be honest, I don’t know what to make of these observations—I’ve taken a “you do you” approach, since they know what it’s like “on the other side”. Maybe I’ll make more of an effort to nudge them against touching the outside of their mask, at least, but I know that to call them a “bad Asian” (or “B-sian”) for not adhering to my level of hygiene is unacceptable and very problematic.

At the end of the day, it’s more effective to educate than cancel someone for not knowing what to do (given that they’re receptive, not bigoted). I’ve gone as far as making TikToks on how to wear a surgical mask (pointers at the end of this article). It’s how I’ve funnelled my culture shock into a means of reminding myself and others that Covid is still around, many people are still ignorant about mask-wearing, we won’t all be vaccinated at the same time, and fear or caution always ebbs.

I came across a TikTok last week of a similarly outfitted teenage couple in baby blue knitwear—as is the trend with Gen Z—dancing to some Conan Grey song in the tube. They ripped off their masks by the outer part as they turned around. “The Karens are gonna come for you,” their commentators, just as young, had said. “As if wearing a mask works anyway.”

To which I’d point to research by the Scientific Advisory Group for Emergencies (SAGE), Centers for Disease Control and Prevention (CDC), University of Oxford and others, supporting the use of face coverings. They also could look so incredibly fashionable if you just put in a little bit of thought. The comments also made me realise that I’m the Karen who’ll report them if I witnessed such a scene, because young people who think they’re indestructible will inevitably be around people who are most vulnerable.

I suppose we’ve come full circle: if someone maskless coughs within a metre of me in Tesco, I’ll Karen them so hard they’ll post a video of me on social media. Except I don’t think I’ll be cancelled for not wanting breathing problems for the rest of my life.

P.S. You’re not wearing your mask right if you:

*“Mask” and “face covering” are used interchangeably throughout this article unless “surgical mask” is specifically stated.