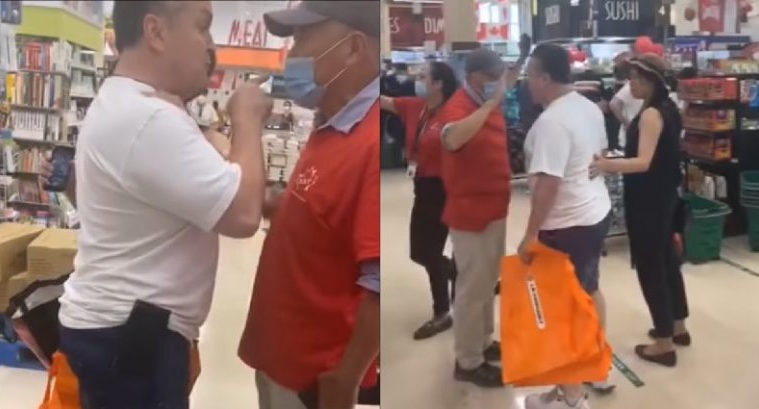 "When you wear the mask, you get sick, it's science."

An elderly Asian employee bravely stood his ground against a racist customer who refused to wear a Coronavirus mask.

According to Global News, the incident occurred at a T&T Supermarket in Mississauga, Ontario.

Footage of the incident showed the man becoming enraged after employees asked him to wear a mask.

The unmasked man is seen standing right in front of the elderly employee’s face.

“I’m going to have the media here,” the man said. “You guys can all wear your masks you can all die.”

He then went on to claim that masks were detrimental to people’s health.

“When you wear the mask, you get sick, it’s science,” he preached.

“This a communist lie,” he continued “Where did we get our Wuhan communist virus? From China, from you guys. Communist virus. Where are you from?” Directing his questions at the Asian employee.

“I’m Canadian,” the employee replied. “Do not screen”

“Where’s your 2 meters?” The customer asked as he edged closer to the employee.

“I have asthma,” the customer said. “When you wear a mask you are breathing in old air.”

Being ushered out of the supermarket, the man started shouting “These communists are all attacking us.”

“He pushed me,” he declared to the other customers.

“I’m going to have the police right at the door,” he said to the employee. “You’re going to be in jail tonight. Your communist government gave us this Wuhan virus from China.”

“I’m Canadian,” the employee calmly said, holding his hands in the air and standing his ground.

“Get out of my face,” the customer said, inching closer to the employee. “Go back to China where you came from and take your Coronavirus back to Wuhan.”

“You’re as Canadian as my butt and I’m Chinese,” the man said.

“When politely asked to wear a mask, which is store policy, the man initially refused because he said it was ineffective,” said T&T Supermarkets CEO, Tina Lee, in a statement to Global News.

“He then became irate and aggressive, claiming to have allergies and then proceeded to claim he and his friend both had asthma. Due to the customer’s behaviour, we stand by the store manager’s decision to ask the customer to leave.”

“There are a few things this man could be investigated for,” said Peel Regional Police Const. Akhil Mooken.

“Causing a disturbance could be one, as would offences under the Trespass to Property Act.“

Mississauga Mayor Bonnie Crombie also condemned the man’s behaviour on the same day the city enforced a law that made it mandatory to wear masks indoors.

“Racist, hurtful and divisive comments like these have absolutely no place in our city and are frankly appalling,” she said.

In a recent report, it was revealed that 43% of Chinese Canadians have faced racist Coronavirus threats.