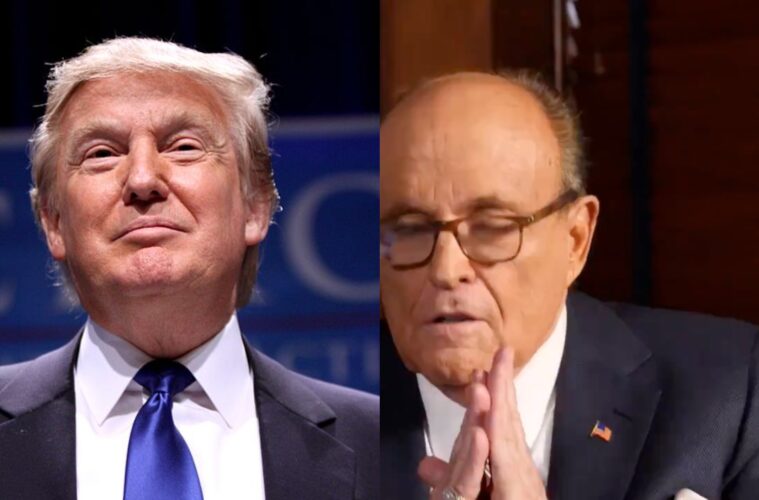 In the seemingly accidental post, Giuliani is seen putting on a racist Chinese accent and bowing with his hands pressed together.

The incident occurred during after an interview for his YouTube channel with former White House Press Secretary Sean Spicer.

“You look like the clerk in an English accounting firm,” Giuliani is heard telling one of his female staff.

“When we do our Christmas Carol play, Jayne, I’ll play Scrooge. She can play Cratchit because she sits there like Cratchit and you can play Tiny Tim,” he adds.

Giuliani was referring to conservative YouTuber Jayne Zirkle who was also present at the interview.

His team then ask Giuliani of Spicer, “did he have good things to say, it was quick?”

“Yeah it was really quick,” Giuliani responds, before asking ,”Whose gonna play the Ghost of Christmas Past?”

Zirkle then shows Giuliani a picture. “I think they’re like using me for advertising now,” she tells him.

“This is you? How about he pays you now?” Giuliana asks. “You want me to work something out with him.”

“Jayne, you’re getting too upset about this. You’re gonna be the most famous model in China,” he says.

“I want Jayne Zirkle picture,” he says again as his mic is taken off.

“Any thoughts on a title?” One woman is heard saying.

“Jayne Zirkle,” Giuliani says again in the accent whilst bowing and placing his hands together.

In other news, a UN report has accused President Trump of “seemingly legitimizing” the rise in hate crimes against Asian Americans.

Rudy Giuliani posts video of him being racist as hell to his own YouTube page https://t.co/5HDWwUsROr pic.twitter.com/e5ly9UqT33