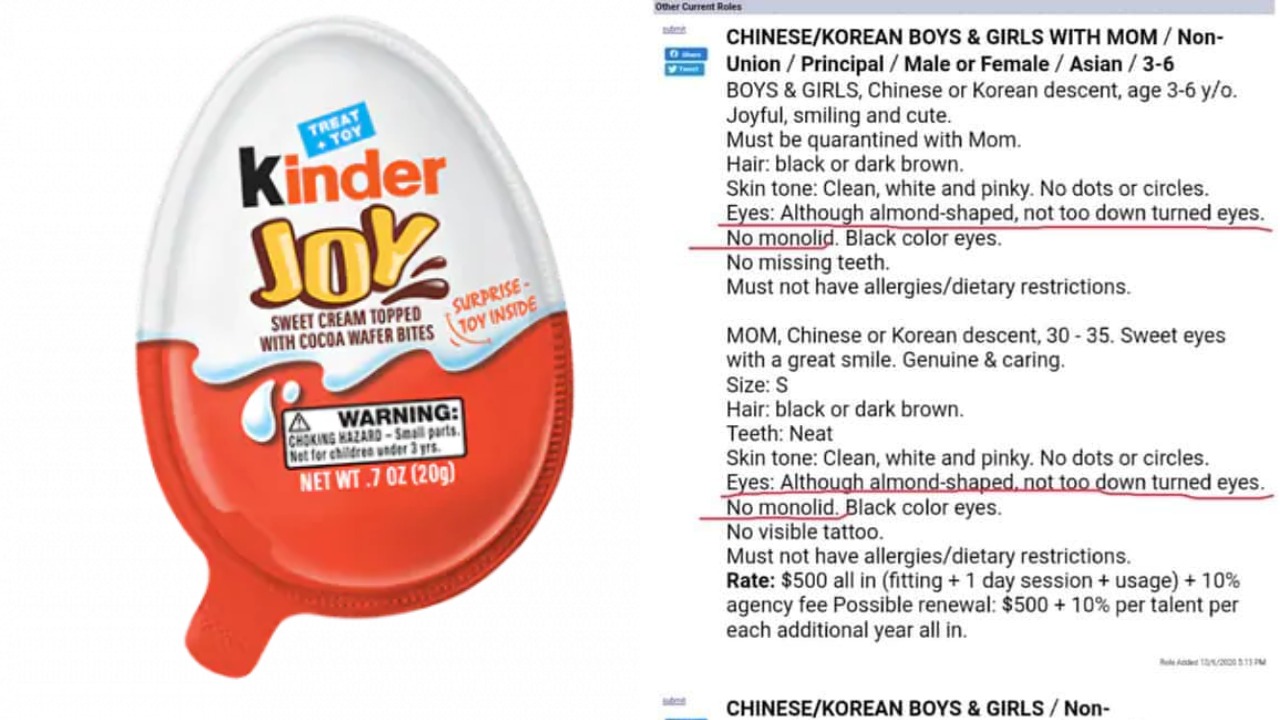 ‘Not too turned down eyes, no monolid’: Kinder Joy slammed for racist Chinese/Korean casting call

Kinder is come under fire for a racist casting for its Kinder Joy chocolate.

Kinder Joy is a chocolate egg split into two halves – one layer of cocoa and cream and the other half contains a toy. Kinder is owned by Italian confectionary company Ferrero.

According to the casting call, the chocolate company are seeking “Chinese/Korean boys & girls with mom” aged 3-6.

In the description of the desired candidate, Kinder wrote that the actor must be “joyful smiling and cute”.

Under ‘eyes’, Kinder wrote “although almond-shaped, not too down turned eyes. No monolid. Black color eyes.”

Screenshots of the casting were shared on Facebook groups with one reposter writing, “This casting notice is just one out of millions of perfect examples of colorism, Western ideas of beauty, and how the media brainwashes you into hating the skin you’re in, if you’re not white.”

“When white people complain about “how hard” it is in the Entertainment Industry, it’s “acceptable.” When BIPOC folx vent about the ABSURD, INCREDULOUS, BORDERLINE RACIST- YET MAJORITY OF THE TIME STRAIGHT UP RACIST AF – BULLSHIT, we experience on the daily, we’re “overreacting”, “reading too much into it”, “overthinking”, “are you sure? I’m sure they didn’t mean it that way”.”

The poster also reassured fellow Asians that their natural eyes are beautiful. “You DO NOT have to play into the stereotypes, propaganda, none of it, in order to be successful. For my fellow Asians, monolids are beautiful!! You don’t have to get plastic surgery to get double eyelids,” the poster wrote.

“Your eyes are beautiful and they help you see things, thank them!! They are a gift!! For everyone, play outside, wear sunscreen and get tan, STOP BLEACHING YOUR SKIN AND BUYING “SKIN BRIGHTENING” PRODUCTS, stop pinching your noses to make them “higher and pointy”, be proud of your heritages, STOP trying to attain whiteness, LOVE THE SKIN YOU’RE IN.”

Other commenters also expressed their outrage at the casting call. “This is so racist,” wrote one person.

“Whatttt???? This is so disgusting!!! What can we do about this?? Something has to be done,” another wrote. 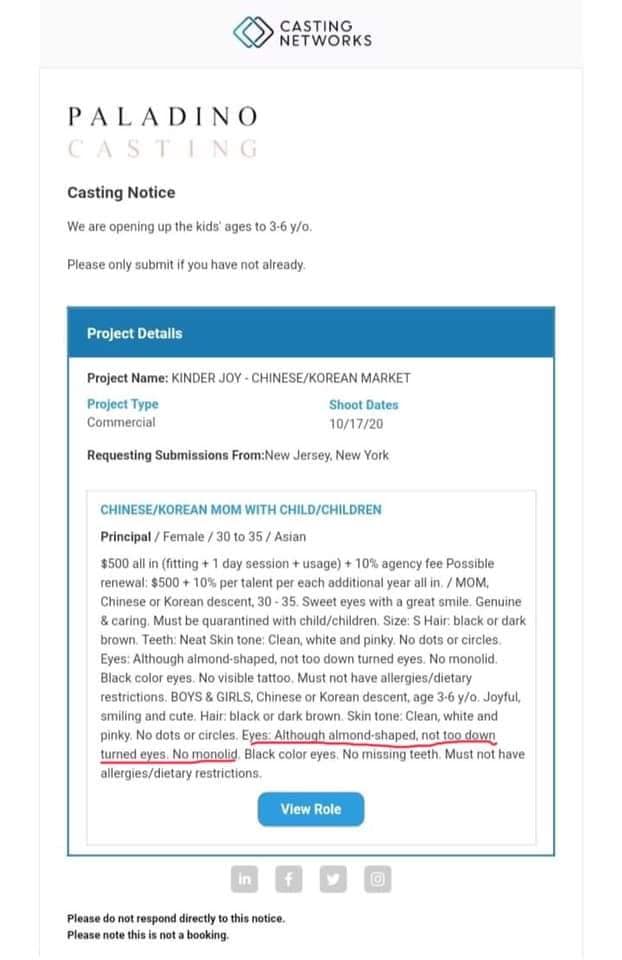 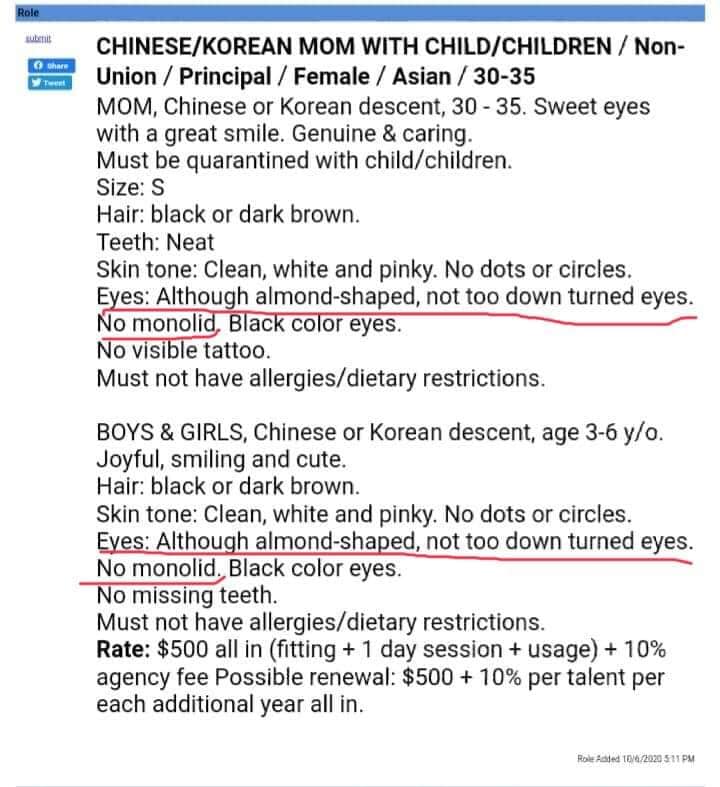 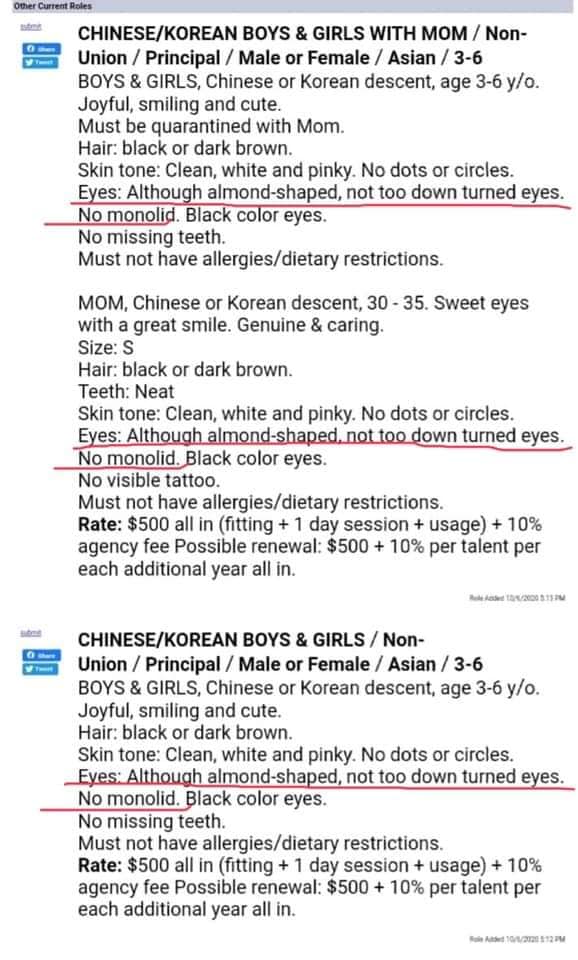