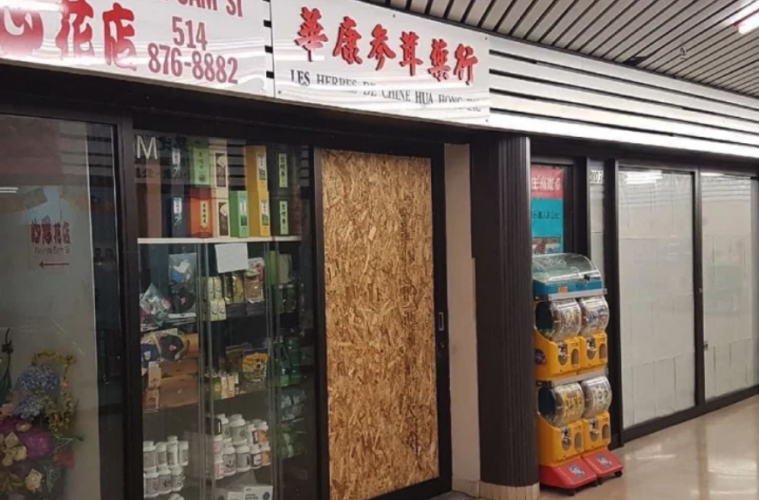 Montreal’s Chinatown has experienced a second wave of vandalism according to Global News.

Earlier this year, Chinatown’s iconic gates were damaged as members of the community were blamed for the Coronavirus pandemic.

Now, vandalism has once again returned to the area with six stores at Chinatown shopping mall Place du Quartier being targeted.

Broken windows and other damages occurred in the stores, despite the stores having security staff and CCTV.

“We had a couple of break-ins in the month of August,” said JC Spa owner Eileen Hu. Hu’s spa experienced three robberies and one attempted break in.

Members of Montreal’s Chinatown have spoken out against anti-Asian racism.

“Since the pandemic we are facing lots of racism against the Chinese community,” said director of Chinese Family Services of Greater Montreal Xixi Li.

Many of the community are now living in fear.

Community leaders believe that other incidents have not been reported.

“Right now Chinatown is having a difficult time to survive and on top of the vandalism that’s going on people are scared,” said Chan Association of Montreal president Jimmy Chan.

“We already have to deal with difficulties with the pandemic, all the restaurants close down people are losing their job, and we do not need extra stress,” said Chan who is also part of the ACT2endracism – speak up campaign.

“The acts of vandalism that have taken place in Chinatown are unacceptable. Now more than ever, we need to stand and work together fight racism and support local businesses,” the statement read.

“The Chinese community contributes to Montreal’s resilience, its culture and is integral to the richness of our metropolis. We are in communication with the SPVM, who work with the Ville-Marie borough to implement appropriate measures and ensure public safety.”

Last week, a 70-year-old Asian mother was attacked at her home in Winnipeg, Canada.