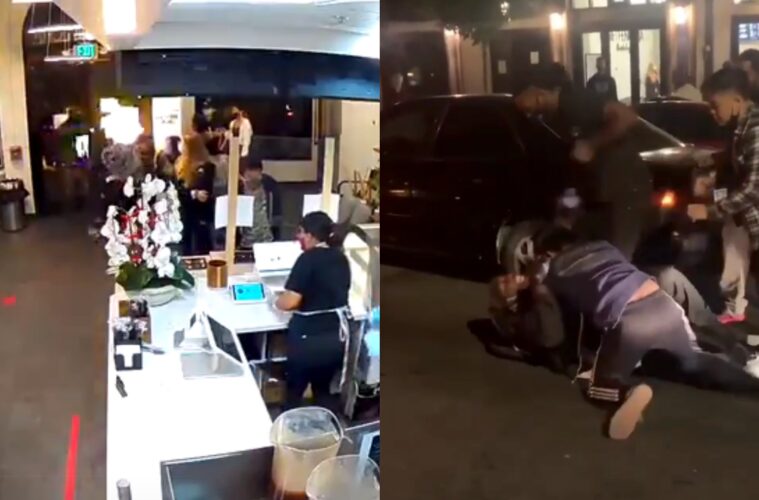 "We were literally just minding our own business, trying to get boba"

An Asian customer was set on fire at a boba tea shop in San Francisco by a man wielding an axe and kitchen knife.

Twitter user Angelique Duong uploaded footage of the incident as well as a detailed account of what happened.

The incident occurred “less than a mile away” from UC Berkeley at boba tea house Feng Cha at around 9pm on Monday.

Duong, her boyfriend and her friends were deciding what to order when a man entered the shop behind t hem armed with a bottle of WD40 and a torch lighter.

The man sprayed the bottle and and igniting the lighter, aiming it at Duong’s friends. In the video, the customers’ hair can be seen catching fire.

“We were literally just minding our own business, trying to get boba,” Duong said.

Fortunately, there was no serious injuries and the customers’ hair was only “slightly burnt”.

Duong’s boyfriend pushed the man out of the shop and began beating him up, preventing him from lighting the fire again. Another friend knocked the WD40 out of the man’s hand only to realize that he was also armed with an axe and kitchen knife.

“They were fighting the guy for about 4 mins trying to retrieve any weapons he had,” Duong said of her friends.

“While my boyfriend was holding him in a headlock, I was able to rip the lighter out of the man’s hand,” she continued.

“He got the beating he deserved,” Duong said. “When police started to arrive we backed up  to allow them to do their job.”

Although the attack was “unprovoked”, Duong strongly believes it “had nothing to do with racism or hate.”

“I believe that the man might’ve been on something and/or was mentally ill,” Duong said. “He kept shouting ‘this isn’t your fight’ and ‘I just want to see my daughter’.”

Other victims had seen the man on the street trying to attack people prior to the incident. The man was taken away in an ambulance.

In other news, Influencer Sophia Chang was harassed by a racist man who told her to “go back to Wuhan”.

FULL STORY. please stop bringing race & hate into this. what the man did was fucked up but we also don’t know what happened beforehand and what caused him to attack us like that. pic.twitter.com/LxbjedHhlS