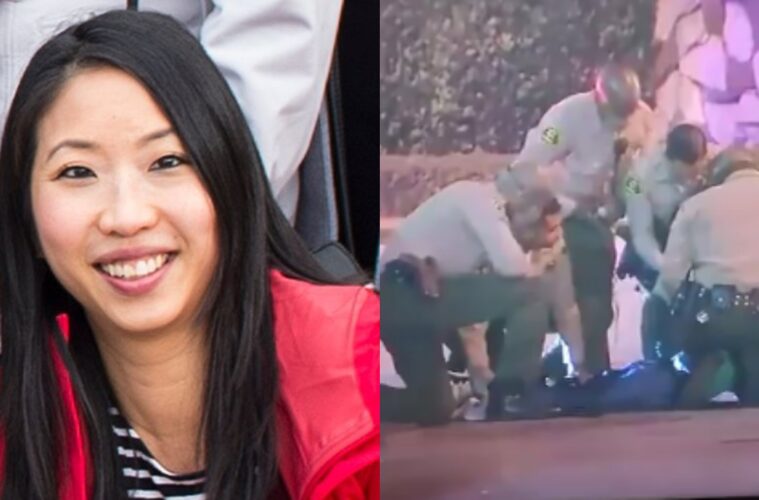 Asian American NPR reporter identifies herself as a journalist, gets tackled by LA police

An Asian American reporter was tackled by Los Angeles police even though she identified herself as a journalist.

Josie Huang is a reporter for NPR Affiliate KPCC and LAist. Like other reporters, Huang had attended a news conference outside St. Francis Medical Center where two officers were being treated after being shot in the head in an ambush.

Huang returned to her car to type up her notes when she heard commotion on the street. Wearing her press ID around her neck, she went out to investigate. She saw men waving flags and taunting police officers. When the police began chasing one man, she followed at a distance and filmed the incident.

One police officer shouts at her to “back up”, which Huang complied with. Officers then marched towards her, ignoring her repeated screams of “I’m a reporter, I’m with KPCC!”

Huang is then tackled to the ground as she shouts, “you guys are hurting me, stop it!” Officers threw her into the back of a police car, refusing to uncuff her for her to put a mask on.

The reporter was detained for five hours in custody and was left with scrapes and bruises.

“Somehow I was able to start a new video right away. You see my phone clatter to the ground and I start shouting “I’m a reporter…I’m with KPCC.” I scream for help from the TV reporters I know are around the corner doing their 11 p.m. live hits,” Huang tweeted with a clip of the incident.

The Asian American Journalists Association has condemned the officers and has demanded an apology for the journalist’s arrest.

“We hold the L.A. County Sheriff’s Department accountable to provide answers for the excessive use of force in the detainment of our colleague,” the Asian American Journalists Association said in a statement.

“The Los Angeles chapter of AAJA demands an investigation and apology for her arrest.”

L.A. County Inspector Gen. Max Huntsman also expressed his dismay at the incident, “What surprises me the most is that once she was identified as a reporter that they transported her, that they cited her.”

The sheriff’s office claim that Huang interfered with the deputies’ arrest of a protester and that she failed to identify herself as a reporter.

“A female adult ran towards the deputies, ignored repeated commands to stay back as they struggled with the male and interfered with the arrest,” the department said, adding that Huang “did not identify herself as press,” the department claimed, “and later admitted she did not have proper press credentials on her person.”

Somehow I was able to start a new video right away. You see my phone clatter to the ground and I start shouting “I’m a reporter…I’m with KPCC.” I scream for help from the TV reporters I know are around the corner doing their 11 p.m. live hits pic.twitter.com/O9CZNuSrQI

ABC7 showing video of radio reporter being taken down to the pavement by officers, handcuffed and led to a patrol car outside of hospital where two #LA County deputies shot in ambush are being treated @LASDHQ #crime #SoCal pic.twitter.com/rTg1UdeDKA