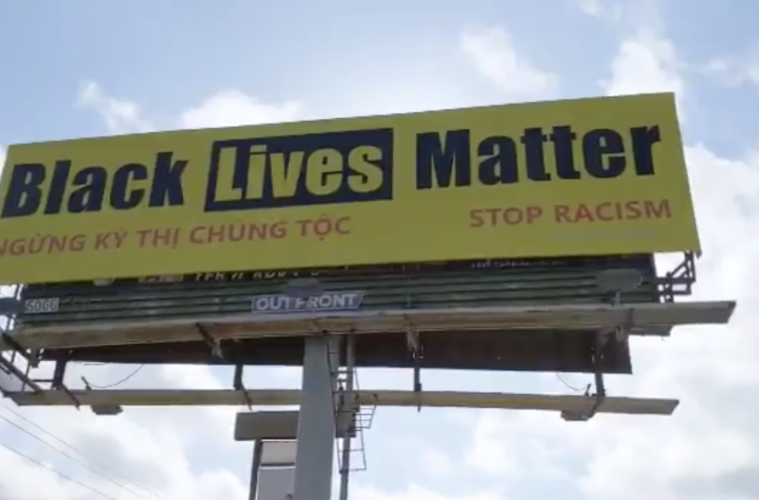 A Black Lives Matter billboard written in Vietnamese has resulted in death threats in Houston.

50-year-old Vietnamese businessman Nguyen Le was moved by the murder of George Floyd and decided to show support for Black Lives Matter by putting up a billboard.

“I couldn’t remain silent anymore, because to me remaining silent would just be complicit to all this,” he said.

In June, Le put up the billboard in Houston’s Viet Town, with a Vietnamese translation underneath ‘Black Lives Matter’.

“We added the Vietnamese translation just because I’m Vietnamese, I was born in Vietnam,” he said. “Everything we do now is bilingual.”

However, Le’s billboard resulted in backlash including a Vietnamese vlogger threatening Le with violence.

Le also received hate speech via his Facebook, with some calling him a communist and 12 clients boycotting his insurance business.

“She said ‘you know about that billboard, I’ve been hearing in the Vietnamese radio they’ve been talking about it’ and she said, ‘initially it made me very uncomfortable,’” said Hoang.

In response, Le released a press statement saying, “I was never told that I am worthless by those with different skin colors. I know that my life would have been a lot harder to build if I did.”

Others offered support for Le, rallying in front of the billboard and defending him on social media.

Ngoc Anh Nguyen, a doctor in Houston, created a GoFundMe for the businessman.

“I’m really encouraged by how many people have donated,” said Nguyen.

Nonetheless, the controversy continued. Immigration attorney Jacqueline Dan said her mother questioned her when she saw her name on the GoFundMe page.

“She said, ‘the Vietnamese community… does not like this billboard,’” Dan said. Her mother believes that Vietnamese stores are targeted by black people. However, Dan rebutted this claim.

“I represent the people who [are accused of] break[ing] into Vietnamese stores and homes — and they speak Vietnamese,” Dan said.

“Those who are older or first-generation tend to be more conservative when it comes to racial justice issues than our younger people.”

In other news, an Asian woman was verbally assaulted by a racist African American man for turning down a lunch date.

Yesterday, a small group of us, including Rep. @HubertVo149 and CM @TiffanyForAlief ruined a perfectly nice ANTI-#BlackLivesMatter event.

They tried to tell us they cancelled it when we showed up.

But we stayed to represent SW Houston and to stand against the racists & bigots. pic.twitter.com/8iZWGQQCci