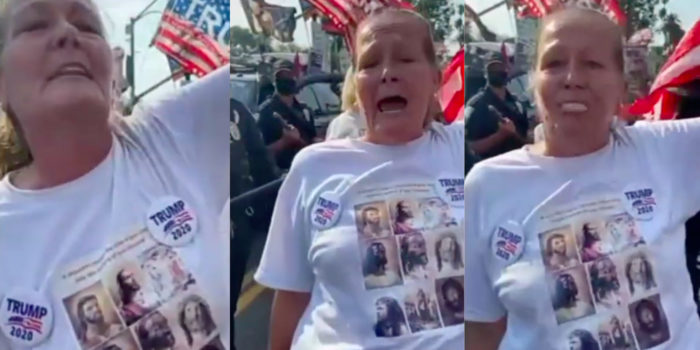 “Go back to where your ancestors came!”

A Trump supporter was filmed dropping her dentures as she tells an Asian woman to “go back to where your ancestors came.”

The incident occurred at an RNC Republican Rally in California.

“You’re in America!” the pro-Trump protester yells at a counter-protester. “Go back to where your ancestors came!”

The Asian woman was reportedly holding a “Trump/Pence out now!” sign.

“F*ck communism!” exclaims. As she beings to state her name, her dentures slip out of place before dropping to her lower teeth.

The woman pushes them back and continues her tirade, stating that she has a YouTube channel titled Carla and Company.

In related news, a recent poll has shown that 54% of Asian American are voting for Joe Biden and only 29% are favouring Donald Trump in the upcoming 2020 election.