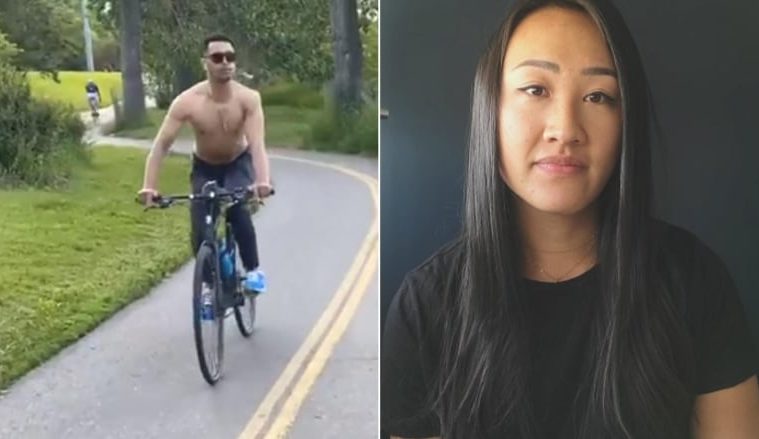 A former college basketball manager was caught on camera spitting at an Asian woman and using a racial slur in Calgary.

Calgary resident Jessica Lau, 27, was skateboarding in Inglewood with her boyfriend when Justin Williams cycled by and spat at her.

“Stupid chink,” he says after he spits, before cycling away.

Williams is a former manager of University of Calgary’s basketball team U of C Dinos.

“The police even said I did nothing to receive that kind of treatment,” Lau said. “He went by very, very quickly, and spat as much as he could. I actually got some in my face and it landed on the side of my arm.”

“I was like, ‘What happened?’ It wasn’t after I saw the video that I realized that’s what he said,” Lau said.

Calgary Police Service charged the man with three assault charges as well as a charge for possession of a weapon.

“During the incident, the offender, while unprovoked, allegedly spat on at least three separate individuals and used racial slurs,” said police in a written statement.

“A witness confronted the offender, who then threatened the witness with a weapon.”

The Calgary police hate crimes are now investigating the incident.

Olympic wresting champion Erica Wiebe was walking along a bike path near Memorial Drive when a man spat on her.

“I looked up and this guy was lining up to spit on me. He did, I turned away, it didn’t make contact, and he just kept on biking by. We were just flabbergasted,” she said.

After seeing the video of Lau’s attack, Wiebe said her incident occurred at a similar time.

“I can’t confirm it was him for sure … it was at the same time, around the same place. It was just crazy that it happened more than once potentially,” she said.

In related Canadian news, a Toronto restaurant server was fired for writing “China” on an Asian couple’s receipt.

Elsewhere,  a racist Nazi-saluting man in Canada threatened to behead a Filipino woman who turned him down.

Unacceptable! An Asian couple were skateboarding down a park trail in Calgary, Canada with the boyfriend filming his…