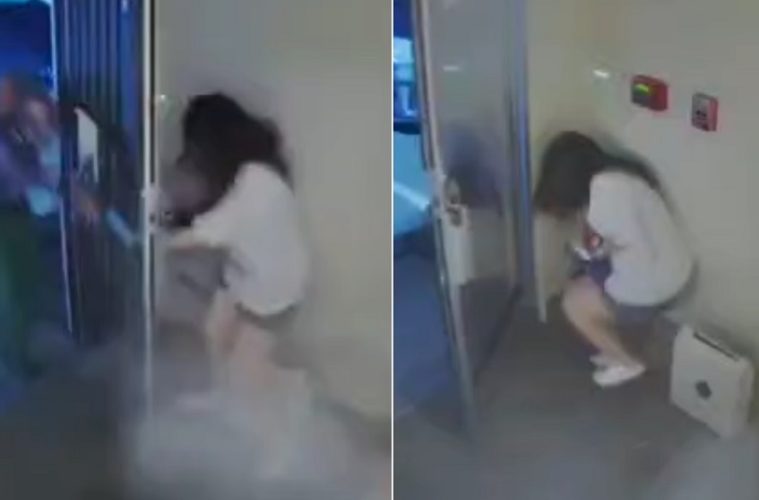 A 51-year-old man was also injured

A 33-year-old Asian woman was killed in a shooting that occurred in Oakland, California.

Video footage of the incident showed the woman among a group of Asians exiting a building. An unknown assailant then charges at the group from outside, driving them back indoors.

A woman, who was the last to re-enter the store, tries to hide by the door but is caught in the crossfire. She is seen arching over behind the door as the assailant flees.

A 51-year-old was wounded in the incident and was taken to hospital with the woman, who was pronounced dead upon arrival. Their identities and relationship have not been revealed.

The incident occurred was reported at 10:11pm on Friday at a building in an industrial area in the 500 block of Julie Ann Way, near Coliseum Way.

Police have not released a motive for the crime and no arrests have been made.

Police and Crime Stoppers of Oakland are offering up to $15,000 in reward money for information leading to the arrest of the shooter.

In related California news, an Asian American doctor who was visiting his parents in Davis was confronted by white neighbours who called the police on him.

OAKLAND, California—A 33-year-old Asian woman was shot and killed and a 51-year-old man was wounded in a shooting Friday night near the Oakland Coliseum. It is unclear if there was even a relationship between the woman and the 51-year-old man. The shooting occurred around 10:08 pm Friday in an industrial building area around the 500 block of Julie Ann Way. CCTV footage shows five people, three men and two women walking out of the building when an unknown assailant started charging at the group of Asians from outside. Four individuals managed to run back into the building and hide behind a second door. However, one of the male friends in the white T-shirt can be seen taking out a pistol behind his back and exchanging gunfire with the assailant. One woman can be seen trying to close the front door and is shot in the mid-section during the gunfight. Both victims were taken to the hospital where the woman was later pronounced dead. Authorities do not yet know what the motive was for the shooting and no arrests have been made. This marks the 43rd homicide in Oakland this year. For comparison, at the same time last year, Oakland counted 44 homicides. This latest murder of an Asian shows no change in the last 12 years. The San Francisco Police Department conducted a 2008 survey and found 85% of all physical assaults in the city, the victims were Asian and the perpetrators were African-American, according to SFGate. There have been several cases within the last year alone that involved African-American assailants raping and robbing elderly Asian women and sometimes murdering them as well. Crime Stoppers of Oakland is offering a $15,000 reward for any information leading to the arrest of the shooter. Anyone with information, please call police at (510) 238-3821 or Crime Stoppers at (510) 777-8572. #asianlivesmatter #justice4asians #asian4asians #shooting