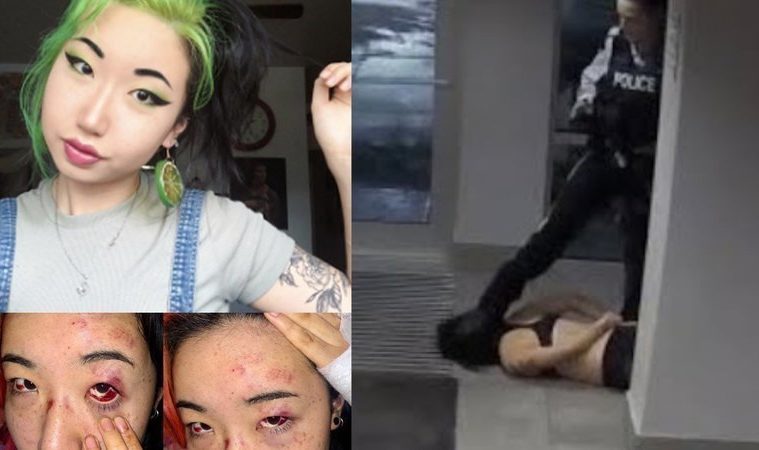 A campaign is trending for a nursing student who suffered injuries after a Canadian police officer dragged her face-first down hallways.

According to the Washington Post, Mona Wang was dragged unconscious by Royal Canadian Mounted Police officer Cpl. Lacey Browning by 20 January at her apartment building.

CCTV showed Browning dragging Wang face-first down a carpeted hallway to the entrance of the building. Browning is seen lifting Wang’s head by her hair and stepping on her head.

Wang, who studies at the University of British Columbia’s Okanagan,  described Browning’s conduct as “abusive and repetitive in the extreme.”

Browning claims that she found Wang holding a box cutter in her hand and lying next to empty bottles of acetaminophen, melatonin and wine.

The police officer also claims that Wang yelled and swung her arms at her. Browning says she struck Wang with an open palm and arrested her under the Mental Health Act.

RCMP’s response stated that “the limited use of force by the defendant Browning was no more than was reasonable and necessary in the circumstances to both direct compliance as well as protect the plaintiff from further harm.”

A petition titled ‘Justice For Mona Wang’ has garnered over 260,000 signatures. The petition calls for Browning to be charged with assault and aims to “prevent more cases of police brutality in Canada.”

“[Browning] must not be allowed to hurt an already struggling person ever again,” the petition reads. “Not only did [Browning] fail to do her job correctly, she also physically abused Wang and lied about her using drugs as an excuse.”

The petition also claims that Browning “attempted to mislead the medical professionals once they reached the hospital and lied that Wang had taken methamphetamine.”

“Toxicologists at the hospital later proved that Wang never had any illegal drugs in her system. It is believed that this lie was told to justify the abusive actions of Browning.”