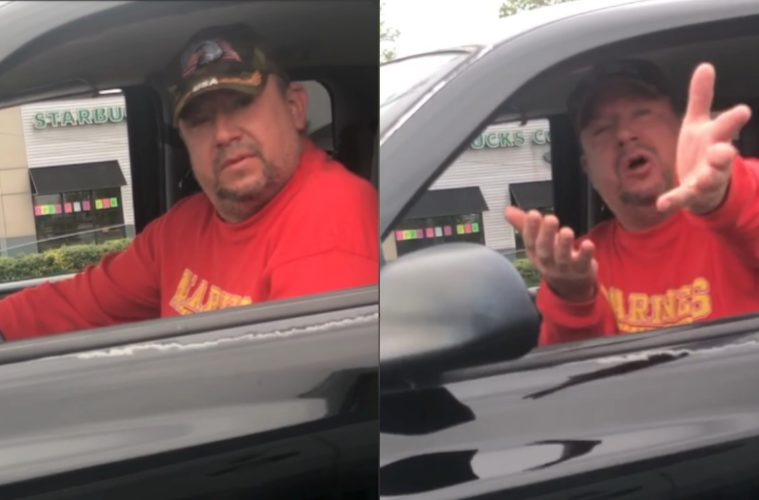 "THIS is what’s wrong with America"

A man who spewed racist Coronavirus hate at an Asian couple in Philadelphia was confronted on camera.

In the clip uploaded by Facebook user Adrianne Kiara, the man is seen sitting in his pick up truck as the Asian couple approach.

“‘DISEASE SPREADER! PANDEMIC SPREADER!’ He yelled at us while at a stop light,” Kiara wrote in the caption.

Although the man is not heard saying the words, the Asian couple are heard telling him to “say it again.”

“What do you want to do?” The man responds, getting increasingly agitated. “Go to the police station and say this guy has an opinion?”

“That’s not an opinion, it’s called hate,” the woman behind the camera is heard saying.

“THIS is what’s wrong with America,” Kiara continued in the caption. “Spewing out racist remarks and calling it an “opinion”. Then running away and denying it when brought face to face with the people that you’re sending hate to and about.”

“Please share so we can expose this man and hopefully stop others for thinking they can do the same!”

At the end of the clip, the back of the man’s pickup truck is shown sporting a ‘Philadelphia Quality Roofing’ sign.

The company has since responded to the clip, commenting, “We are very sorry you had to go through this but this man does not work for our company. We are a family owned business with a 7 man operation including myself. We leave lawn signs at every job completed all over the city.”

“We are not sure what this man is doing with one of our signs. All of our company trucks are lettered and have ladder racks. If someone like this worked for us, they would be fired immediately. We are showing this video to see if anyone recognizes him, and hopefully can get to the bottom of this.”

Although the Philadelphia company seems to have no connection with the man, Philadelphia Quality Roofing has been review-bombed since the video was posted.

“I told you on the first post that guy does not work for quality roofing, now we have people calling my company harassing me and putting up bad reviews and ruining my company I worked years to build,” the company commented.

“2 wrongs don’t make a right now you are starting a hate crime on my company and we have nothing to do with it thanks.@adrianne kiara @diontrinidad”

Facebook user Thomas Goodyear, who seems to own the company added that he has been harassed due to the video.

“This guy does not work for my company, I told you and your wife multiple times , now I have people calling harassing me putting bad reviews up all over , its like you made a hate crime on my company when I informed you both we have nothing to do with it,” Goodyear wrote.

“Thanks for destroying my small business.”

In related news, a suspect who was wanted for a racist violent attack in Vancouver has died from a drug overdose.

“DISEASE SPREADER! PANDEMIC SPREADER!” He yelled at us while at a stop light.

THIS is what’s wrong with America….