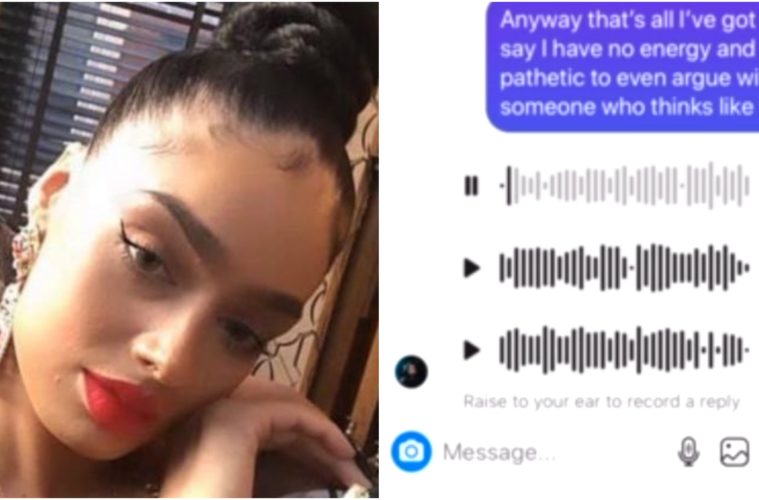 ‘You as a species, the Chinese’: More voice messages surface from racist ‘Coronavirus’ British model

"Just like the Germans did to the Jews, you just gotta hold your hands up, don't be a dickhead"

More voice messages have surfaced from the British model who shared racist Instagram stories about the Coronavirus.

In her first post, Foreman wrote “Chinese disease”. She then followed it up with “Fk the chinks STRAIGHT UP over populated all look alike & ruined, infecting the best of us.”

She then claimed her social media was hacked but voice messages from her Instagram account suggested otherwise.

Now, even more voice messages from the model have surfaced in which she calls the Chinese a “species”.

In one voice message to an Instagram user, Foreman claims that her attack was not personal. “It’s not directly at you,” she says. “You know the facts, it is all there. I wish it wasn’t but the Chinese are the worst ones.”

However, she then U-turns from “not directly at you” and calls the Instagram user the same “species.”

“It’s disappointing, it’s upsetting, but it’s a fact so please don’t deny that,” she added.

Foreman then asks the Instagram user to take responsibility, even though she claims the attack was not on her. “If anything, you should be putting shit right,” she suggested. “Don’t target the ones who are in the right and make them feel wrong because they are standing up for their rights.”

When the Instagram user calls out Foreman for her “disgusting behaviour”, Foreman once again insists the attack wasn’t personal and was just about the Chinese “species”

“Obviously I’ve hit a nerve,” Foreman said. “It wasn’t directly at you as a species, the Chinese.”

Foreman then seems to acknowledge that not all Chinese people are the same. “What you’re trying to say is we’re not all the same,” she says. “Obviously you’re not. There is some good people out there.”

However, she then immediately blames the Instagram user’s “kind” for animal cruelty. “It’s your kind that do that to sharks,” she said.

Clearly Foreman failed to take her own advice by “reacting” to the Instagram user calling her out for her racism.

“You kill a hundred million sharks a year,” Foreman repeats. “I shouldn’t even have to explain this to you, there is no argument, baby.”

In a wild and bizarre turn of events, Foreman then claims that she was “hurt” by the Instagram user.

“I genuinely feel quite sorry for you because you’re getting mixed up,” she said. “I’m kind of hurt. If I was you, I’d be like ‘I think you are right’. You’ve got no leg to stand on. Don’t be dumb babe please, wake up for fucks sake.”

Foreman then condemns the Instagram user for being upset about racism.

“‘Racism gets you nowhere’, is that the only thing you picked up on?” She asks. “It’s got nothing to do with race, these are facts.”

Despite Foreman repeatedly claiming the attack was not directly on the Instagram user, she once again asks her to take responsibility.

“If people turned round said ‘black people did this and ruin sharks’, I’d put my hands up,” she said.”

As a final nail to the coffin, Foreman compares the Chinese to the Nazis. “Just like the Germans did to the Jews, you just gotta hold your hands up, don’t be a dickhead,” she said.

In related news, a pair of British girls were filmed spewing racist comments to an Asian couple in London, calling them “smelly Chinese” who had “Corona”.