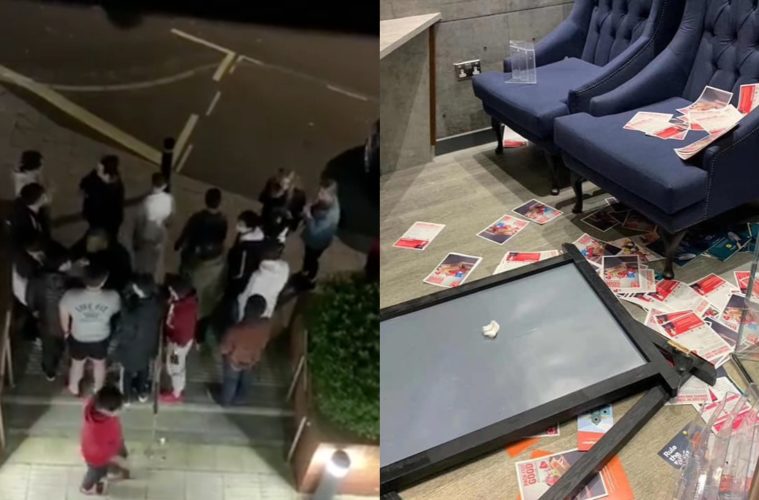 "Go back to your fucking country"

A group of teenagers were seen attacking Chinese international students in Southampton University for wearing masks.

Facebook user Yijun Xiong uploaded the footage with a description of the “xenophobic act”. In the post, Xiong wrote that the international students were returning to their dormitories when a group of teenagers approached them.

“Extorting” the students by “wanting free masks”, the group of teenagers began chasing the students when they started to run away.

“The group started to use the store’s trolleys to corner and assault them,” Xiong writes.

Although the students managed to reach their dormitories, the teenagers followed them and were heard shouting “Chinese prick”, “Chinese virus” and “go back to your fucking country”.

Daily Echo reports that the attackers were even seen spitting at the students, with one person “throwing a large piece of wood towards them.”

The attackers then began damaging the dormitory. Pictures shared by Xiong showed leaflets scattered and a broken sign board facing downwards on the floor.

According to Xiong, a mother of one of the attackers appeared soon after the vandalism. “She approached the police and tried to get her daughter out of the situation with ‘She is my daughter’, ‘We live right here’, ‘She is 14’,” Xiong writes.

“The parent showed no apologies nor empathy to the victims the whole time,” Xiong added.

The victims were three men and one woman in their early 20s. Fortunately none of the victims suffered an lasting physical injuries.

A spokesperson from Hampshire Police “it was reported a group of people had assaulted and been abusive towards a group of four Chinese people wearing medical face masks.”

“It is reported the incident was racially aggravated and linked to the coronavirus. Enquiries are ongoing today to identify those who targeted them.”

“Any crime perpetuated through ignorance, prejudice or hate is unacceptable.”

“We are working with our partners and the local Chinese communities and we would encourage everyone to report incidents to us either by calling 101, or 999 in an emergency.”

“Reports can also be made online on the Hampshire Constabulary website, through True Vision or using the growing network of Third Party Reporting Centres for hate crime.”

“Anyone who has information to help our investigation into this incident should call 101 quoting 44200101024.”

In related news, an entire train carriage in Birmingham defended a Chinese woman from a racist who said she had Coronavirus.