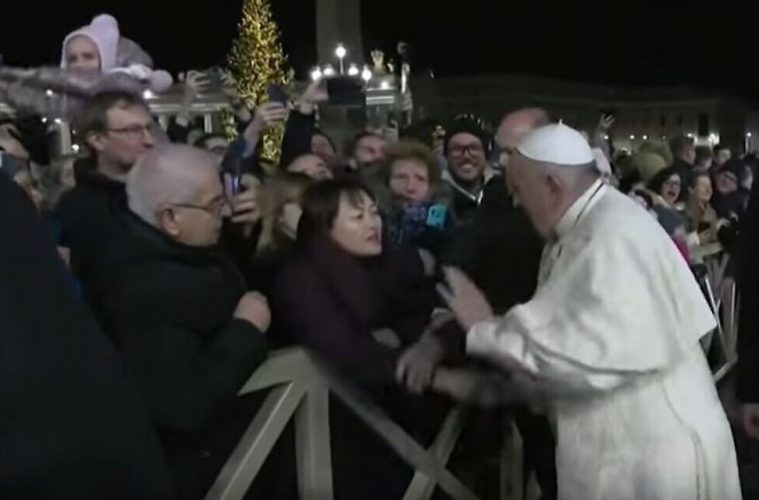 "He's the Pope, he's not Jesus. So I am fine with him saying 'get off me,' he doesn't need to apologise"

Pope Francis has apologised for slapping away an Asian woman’s hand during a greeting in St. Peter’s Square on New Year’s Eve, but some believe his apology was unnecessary.

In a video clip of the incident, the Pope is seen greeting people and shaking their hands on his way to the Nativity scene in Vatican City.

An Asian woman is seen at the front of the crowd, making the sign of a cross, before grabbing the Pope’s arm.

Alarmed and caught off-guard, the Pope tries pulling away from her and slaps her arm away.

Francis has since made an apology regarding the incident, highlighting the sin of violence towards women.

“Love makes us patient. So many times we lose patience, even me, and I apologize for yesterday’s bad example,” he said. “Women are sources of life. Yet they are continually insulted, beaten, raped, forced to prostitute themselves and to suppress the life they bear in the womb.”

“Every form of violence inflicted upon a woman is a blasphemy against God, who was born of a woman.”

However, Fox News host Emily Compagno argued that the Pope should not have apologised and that the woman “deserved to be choked out by his security.”

“I thought that was so violent on her part, so uncalled for,” she said. “And you know what, he’s the Pope, he’s not Jesus. So I am fine with him saying ‘get off me,’ he doesn’t need to apologise.”

“The only sliver on the other coin would be that he can let the security guards be the bad guy for him and he can just kind of be like the victim for a second and let them do their job,” she continued.

“But if that had been me in his shoes, she would be out of there.”

Fox News host says that woman who grabbed Pope Francis’ hand and got it smacked “deserved to get choked out by his security guards” pic.twitter.com/1DY1Q16dt7