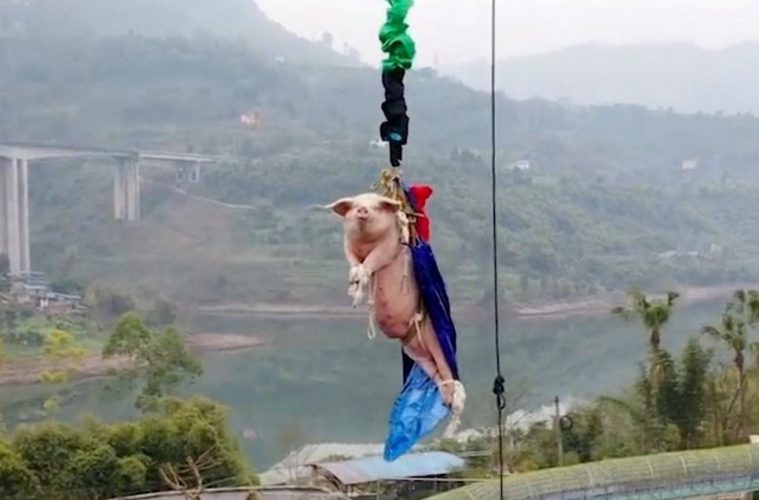 The 75kg animal was pushed off a 68-metre high tower

BBC reports that a Chinese theme park forced a live pig to bungee jump to promote its newest attraction.

Video footage of the incident shows organisers pushing a 75kg pig off a 68-meter high tower. The pig is heard squealing as it falls.

After the event, the pig was sent to a slaughterhouse.

The incident resulted in a backlash online, highlighting animal rights in China.

“This is a super vulgar marketing tactic,” one commenter wrote.

“Killing animals for consumption and treating them cruelly for entertainment are two different things,” another said. “There is no need to torture them like this.”

“Imagine the sheer horror this beautiful creature endured,” one person tweeted. “And the pathetic excuse of humans rewarded this gentle being with the slaughterhouse.”

Animal protection organisation Peta stated the incident was “animal cruelty at its worst”.

“Pigs experience pain and fear in the same ways that we do, and this disgusting PR stunt should be illegal,” Jason Baker, Peta senior vice-president of international campaigns, told BBC News.

“The Chinese public’s angry response should be a wake-up call to China’s policy-makers to implement animal protection laws immediately.”

In response, the theme park issued a statement saying “we sincerely accept netizens’ criticism and advice and apologise to the public.”

“We will improve [our] marketing of the tourist site, to provide tourists with better services,” it added.

Imagine the sheer horror this beautiful creature endured. And the pathetic excuse of humans rewarded this gentle being with the slaughterhouse. https://t.co/oEZ08p8VnZ