Homosexuality has been compared to paedophilia, beastiality and necrophilia

Chinese textbooks are being slammed for claiming that homosexuality is an “abnormal sexual mental disorder”, comparing it to paedophilia or those who have sex with animals or the deceased.

According to the BBC, the textbook has advised that you can tell that someone is “sick” with homosexuality by looking out for “a lack of confidence in sexual performance, a fear of being rejected by the opposite sex and other anxieties including family pressures.”

The textbook called “Consulting Psychology”, published by Guangdong Higher Education Press”, has even provided tips in overcoming such tendencies.

1. Platonic love relationship: Find an “elegant and caring” member of the opposite sex. Establish a relationship as friends initially. Then hope it becomes something else.
2. Repulsion therapy: Induce nausea with forced vomiting or fear of electrocution when thoughts of having a lover of the same sex emerge.
3. Shock therapy: Cause major shock to your lifestyle by moving to an entirely new environment in order to sever connection with previous friends, etc.
4. Sexual orientation transfer: When you are aroused, practise channelling that feeling towards somebody of the opposite sex using pictures and audio recordings. 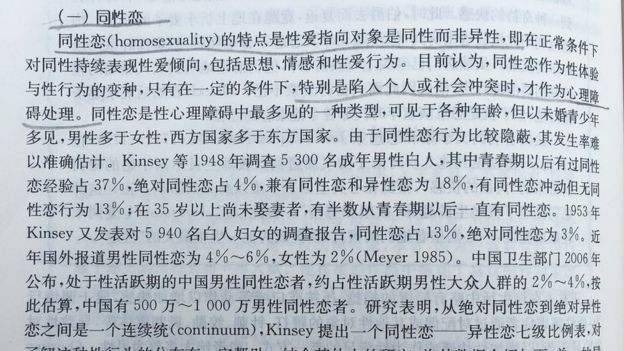 Lesbian student Qiu Bai of Sun Yat-Sen University, Guangzhou has since been challenging the regional education department by advocating against these textbooks.

With the help of her lawyer, Qiu Bai tried to go to the publisher, but her claim was ignored. She then approached her university’s library, but was told that it was a matter of academic freedom so they could not remove the books in question.

Even the Guangdong provincial court refused to accept the case as she was not directly harmed by the books.

However, even though her progress was stunted by these institutions, she was not deterred in pursuing the fight.

The student went to the nation’s capital to sue the national education department. However, at the hearing in the Beijing No 1 Intermediate People’s Court, the department didn’t retain legal counsel.

Her lawyer, Wang Zhenyu said,  “I think the ministry of education must be pretty confident. The two representatives who turned up today work for the department’s legal office. They probably think that they know enough about the law. But we had hoped they would hire a lawyer so we could have a proper professional dialogue.”

“I’m not surprised that Qiu Bai was given at least 5 minutes to make a statement. When we had a pre-trial meeting with the same judge, they always seemed amicable. I think the judge understands that we’re fighting for a chance for Qiu Bai to speak up.”

Whilst a result expected soon, nobody believes that Qiu will be successful.

“I feel a bit disappointed today,” she said. “I took a long journey from Guangzhou to get here hoping they could solve this problem quickly but the result is disappointing. It’s been a year. It’s the same judge and the same defendants and we’ve made no progress at all.”
“The ministry of education needs to state publicly its point of view on how to present homosexuality. It needs to at least respond to my petition about these textbook errors and ask publishers to check if they have made similar errors. What I’m asking them to do is very specific.”

Nevertheless, she did enjoy small crowds of success with people cheering “man man lai”, which means to take things step by step in Chinese.