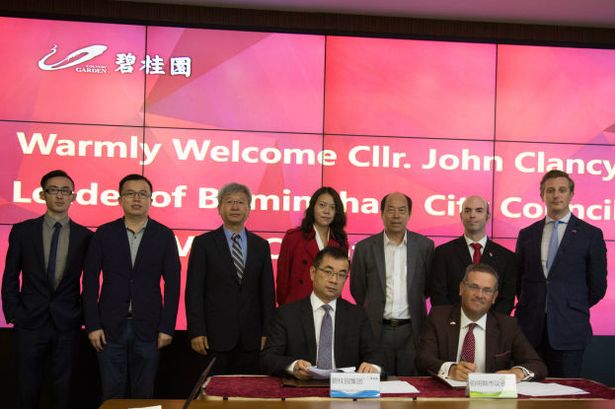 A Chinese housing developer has agreed to invest £2bn in Birmingham, England.

Birmingham is the largest and most populous British city outside London.

Clancy said, “the landscape has inevitably changed post-Brexit and Birmingham is already out of the starting blocks. That’s why I’m here selling our city to many of China’s leading investors. This agreement is about bringing good jobs and quality homes to Birmingham.”

“Country Garden has a proven track record of building homes at pace and scale. They have played a major role over the last 20 years as housebuilders have met the massive demands of China’s rapidly expanding economy. Bringing this level of investment and experience to Birmingham would be a massive economic boost to the region’s businesses, skills base and families. It’s about bringing new, big capital spend to the city, quickly.”

“This is about building houses, jobs and futures for young Brummies and families across the region. Country Garden understands the demands in Birmingham and is clearly excited at the prospect of investing in our young, growing city.”

Clancy had hoped to secure deals which would help the UK’s second city achieve its target of building 80,000 new homes over the next 15 years.

Yang Guoqiang, founder and Chariman of Country garden said, “I have been impressed with Birmingham’s ambition and huge potential and I am delighted to announce this investment commitment to support significant housing and infrastructure development in the city.”

“We have a proven track record in delivering quality housing at a scale to match Birmingham’s ambitions and with major projects coming to the city, including the forthcoming High Speed Two project, these are exciting times for Country Garden and Birmingham.”

Country Garden is China’s fifth largest property developer, with over 300 high-end township developments, 54 five-star hotels across the Far East and Australia and has built and sold more than 2.5 million properties.

Chief executive of the Greater Birmingham Chambers of Commerce Paul Faulkner said, “Post-Brexit, it’s more important than ever that our city works with global capital markets to bring in new money from large institutional investors.”

“Bringing in £2 billion for housing and other projects will have a much larger economic impact across the region for Birmingham companies and construction supply chain. Importantly, it cements a relationship with the all-important China market.”