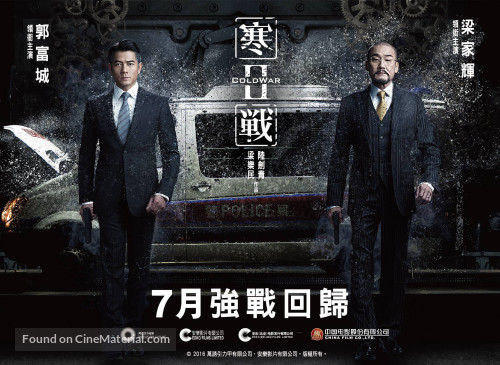 A decent follow-on attempt to the 2012 box office hit.

Aaron Kwok and Tony Leung Ka Fai butt heads once again in this star-studded yet convoluted and mildly disappointing sequel.

Before I begin this review, I would like to start off by saying this is the first time I became aware of the limited distribution and promotion of new East Asian movies in the UK, or more specifically, in London. By pure chance I discovered Cold War 2 was being screened in the Panton Street Odeon situated near Chinatown and Leicester Square. So if anyone in London wants to see selected new releases from East Asia, go there! Back to the review, I was initially very impressed with Cold War (2012), made by director-writer pair Sunny Luk and Longman Leung. It reminded me of Infernal Affairs; a slick well-executed movie with great production values and filled with big name stars. Hence I decided to see if its sequel could match or surpass the first and whether the highest grossest Chinese-language movie of all time in Hong Kong was worth watching at all.

Cold War 2 follows straight on from the cliffhanger presented at the end of Cold War. Having successfully orchestrated and completed the operation to find the missing police van and officers in the first movie, newly appointed Hong Kong Police Commissioner Sean Lau (Aaron Kwok) receives a video message from a stranger. It turns out his wife has been captured and in order to save her, he needs to follow the stranger’s demand of releasing Joe Lee (Eddie Peng); the imprisoned mastermind behind the said missing van and officers who also happens to be the son of the retired Deputy Police Commissioner and Sean’s old rival, MB Lee (Tony Leung Ka Fai). As expected, things don’t quite go to plan and events spiral out of control, leading to Sean and MB shouting and pointing fingers at each other.

The movie boasts an incredibly strong cast. Aaron and Tony are supported by a number of returning casts and characters (Aarif Rahman and Charlie Young) plus we see some new faces entering the fray in the form of Janice Man, Waise Lee and childhood hero, cult action star and deity, Chow Yun Fat. Despite this star-studded line-up, the overall story and its pacing falls a bit flat in my opinion. It’s rather confusing. Even the stars themselves were in a bit of a muddle. Plus I never understood why Aaron’s character decides to speak English (in one of the most unorthodox Hong Kong accents I’ve heard in cinema) during certain points of the film, it’s just unnecessary.

The same serious tone seen in its predecessor and the director-writer pair’s other venture Helios is retained in Cold War 2. Everything from the dialogue, the score to the cinematography oozes intensity and seriousness. It got to the point where I felt some parts were unnecessarily and overly dramatic for no reason at all. The movie is littered with scenes involving secret meetings, backhand deals and bureaucracy. All of which I expected to build and lead up to something grand but whatever the writers strove and aimed for, it never materializes. The tension we witness throughout the movie amounts to nothing worthwhile in the end.

Cold War 2 still has its moments though. The hectic action sequences are executed very well. We also witness Chow Yun Fat taking a leaf out of Nicholas Cage’s book of acting by entering Cage Rage shouting mode several times in the film, something I found highly amusing. Aaron and Tony are both naturally on top form, individually and when we see them together on screen confronting each other. Lastly, I couldn’t have been the only viewer who felt a tinge of nostalgia when I saw Chow Yun Fat and Waise Lee appearing on screen together again; reminding us of their classic pairing in John Woo’s classic A Better Tomorrow or the much underrated rom-com concerning bigamy, Diary of a Big Man.

Personally I felt slightly underwhelmed and disappointed with Cold War 2‘s confusing plot and its strange ability to build moments up yet not able to “unleash them” effectively. Despite all of this, it is still a sharp piece of work and its strong cast really carry the film. I look forward to see what Cold War 3 brings because like R Kelly’s Trapped in the Closet Part 23, the movie ends in another cliffhanger.