As an evolving neighborhood, Koreatown continues to allure, entertain and house a multicultural mix of residents

Korean BBQ. Karaoke. Soju. Boba. Hot pots and tofu. This is what surrounds me in Los Angeles’ Koreatown: a bustling and lively neighborhood that keeps evolving as the resident demographics change.

When I got a job and planned to move out to LA, I had no idea where I was going to live. I knew each neighborhood in the city would have its own distinct culture and vibe. Going to college in Chicago, I had lived in the college-kid heavy South Loop and the college-meets-young yuppie families Lincoln Park. But I loved exploring new neighborhoods and what they uniquely had to offer. With Los Angeles, I absolutely had no clue. My only basis for apartment hunting online was that I’ll be working in West Hollywood (nicknamed WeHo) and that I needed to live within reasonable public transportation or biking distance. Plus, it had to be within my skimpy “entry-level salary” means. No Beverly Hills 90210 or Malibu living for me!

As I skimmed several blogs about living in LA, I kept noticing a recurring neighborhood pop up: Koreatown.

Noted as up and coming, walkable, and best of all affordable, this neighborhood is closer to Downtown LA than the beach.

I had only limited exposure to Korean neighborhoods or culture. Chicago’s Korean neighborhood is quite small and is distant from downtown (at the end of the CTA Brown line). And I merely passed through NYC’s K-town on a busy Friday night trying to get a karaoke room.

Immediately I was intrigued. I haven’t lived in close proximity to Asian culture, being from the Midwestern United States. This was my chance to be close to spicy food, lively entertainment, and live within my means. To be honest, I just really needed a place to rest my head where I could easily get awesome food. Easy boxes to check off. And now after living here for almost a year, it is one of my favorite neighborhoods in the city. It feels comfortably in the middle of LA with easy access to events happening all across the city. As long as I can afford it, I’ll be staying within this bustling neighborhood where I can do it all: eat delicious food, check out shows and do all kinds of fun activities!

Situated just south of famous Hollywood, Koreatown became known as such after the wave of Korean immigrants began settling in the area in the 1950s and 1960s. The area’s Art Deco buildings housed many new Korean businesses and the neighborhood expanded. The borders are roughly Western Blvd, Olympic Blvd, Hoover St and Beverly Blvd, but you can still see Korean churches and businesses into the adjacent neighborhoods.

Koreatown suffered during the Rodney King riots in 1992. Many businesses were looted and damaged when tensions rose between Korean and Black communities of Los Angeles. After the violence, both communities and their leaders came together to encourage peace.

Today, the neighborhood is the densest and one of the most diverse in LA as many people from different backgrounds call K-town home: Mexicans, Bangladeshis, Vietnamese, and more. It is best exemplified by the array of delicious cuisines the neighborhood has to offer. Below is a clip from an episode of Anthony Bourdain: Parts Unknown where he explores the splendor of Koreatown.

LA has some great street and mural art throughout the different neighborhoods. As Koreatown is rebuilding and regenerating, there are more blank canvases for some amazing mural artwork. It provides a bit of local flavor and a landmark for that part of the neighborhood–if not a little bit of cheer! 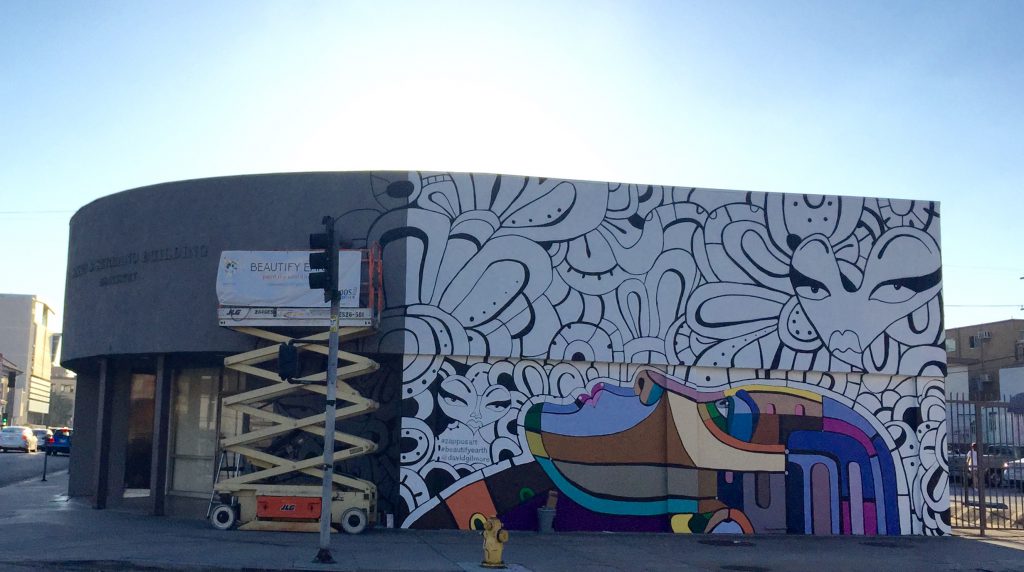 This piece is part of a citywide art project through the non-profit Beautify Earth and is sponsored by Zappos. Just a block west, a new bar called Here’s Looking At You opened up with an eye catching piece of street art. It beckons for passers by to check out the new spot–or at least take a stellar Instagram picture. 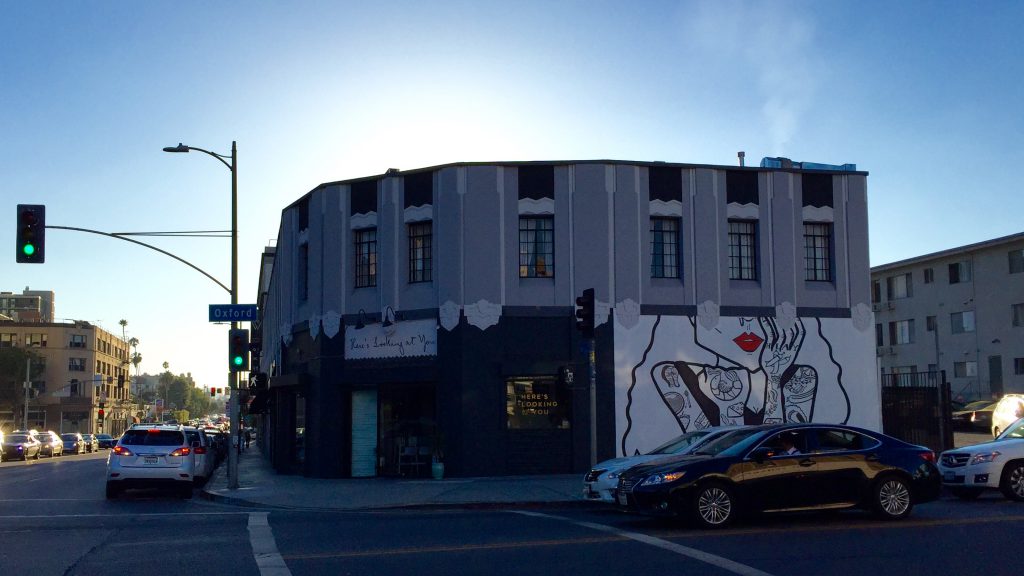 A Taste of the Life

If you seek a little K-pop or Korean cinema in your life, look no further. But don’t neglect the several Southeast Asian consulates located on Wilshire Blvd as well. Just this past Sunday, I stumbled upon the Indonesian Independence Day Festival where I could feast on many traditional snacks I missed, watch some Balinese Gamelan music and meet others from the Indonesian diaspora in LA! 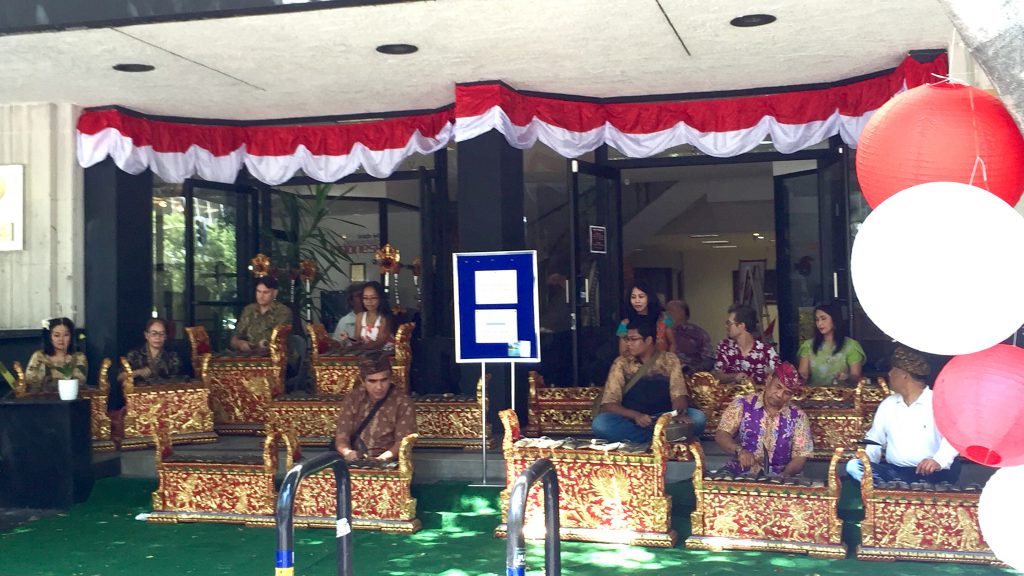 If you want some Filipino fast food, look no further than their notable chain Jollibee. Been craving a Spam sandwich or some Asian fried chicken? It will cure your fix. My favorite is the Halo-Halo dessert, which closely resembles the Indonesian Es Campur. Topped with a slice of flan and a scoop of ube and jackfruit ice cream each, it is magic in a cup! 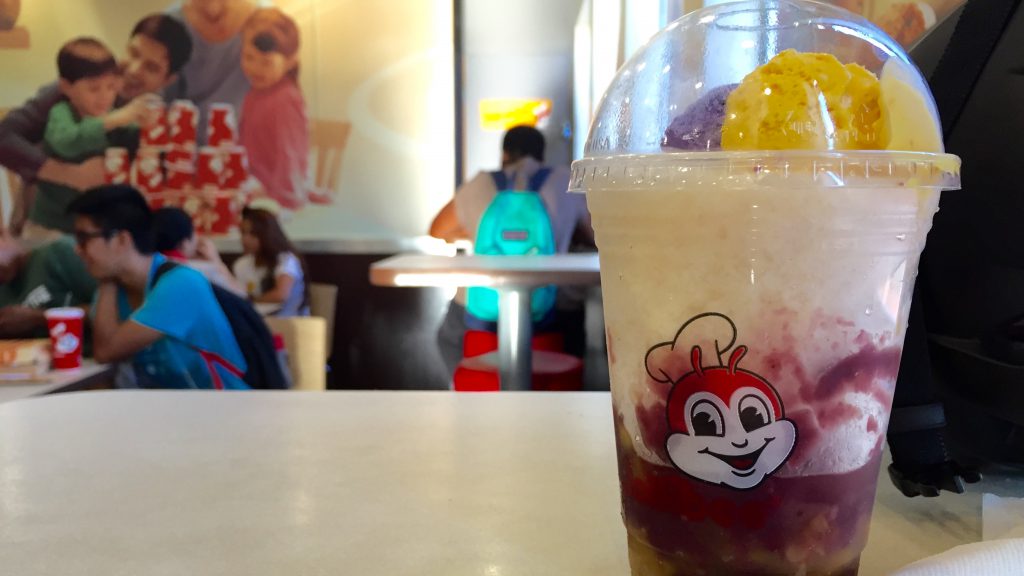 I didn’t even crack into all the amazing things about Koreatown–I’m still exploring and finding hidden (and obvious) gems. For those who want to see more, there are a few great social media accounts that share their passion for this vibrant neighborhood. Perhaps the wanderlust will hit you to visit or at least get you inspired to explore your own untraveled neighborhoods!

Michael Pak is a designer dedicated to exemplifying the beauty of Koreatown. He organizes the @KoreatownRunClub and helps promote local events and businesses. Much like an unofficial ambassador, his Instagram account shares some good food and good vibes.

Coordinated by a local resident, this account highlights openings of new restaurants and businesses to cool events happening in the neighborhood. They do a good job of retweeting relevant stories from various news sources and blogs that highlight Koreatown as well.

One of Koreatown’s celebrity chefs, Roy Choi runs several food operations in and around Koreatown. His popular food truck, Kogi BBQ, brings the magic of Korean tacos all across LA while his two restaurants in The LINE hotel (Commissary and POT) provide two dining vibes. Commissary is a greenhouse that sits poolside, a great brunch atmosphere, and POT has shareable Korean hot pots and Asian twists on traditional bar food. The crispy chicken wings are my personal favorite!