FEATURE: What exactly is “Asian Flush”?

Why a number of East Asians glow red after consuming alcohol?

“Asian Flush” or “Asian Glow” is the term given to skin reddening effect which approximately 36% of the East Asian population experience after consuming alcohol, author included.

I guess like for many people, my level of alcohol consumption suddenly spiked sharply upwards once I started university. So inevitably it was during Imperial College London Fresher’s Week 2009 that I discovered I was affected by so called Asian Flush (also known as the alcohol flush reaction). Near consecutive nights of drinking made me slowly realize that I was physiologically different from the new friends I made. Namely they didn’t turn bright red after their second or third snakebite (an unorthodox but very drinkable concoction made from an unholy trinity of cheap lager, cider and blackcurrant cordial).

Interestingly, I was never given any real stick by anyone for turning bright red. Most people were too inebriated to notice or care I think.

The human body metabolizes alcohol in a distinct biochemical pathway which occurs in the liver. Alcohol is first converted into a chemical called acetaldehyde by the enzyme alcohol dehydrogenase (ADH). Acetaldehyde, a toxic and cancer causing agent, is then further converted into acetate by another enzyme, aldehyde dehydrogenase (ALDH). The body can then finally process the acetate into water and carbon dioxide. The key to Asian Flush lies in the genetic variations of the ADH and ALDH enzymes which are found in the East Asian population. 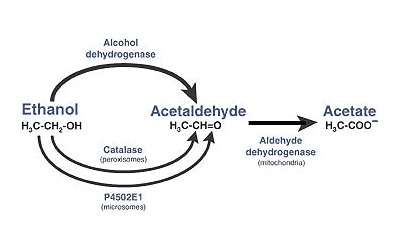 A number of different studies have shown a high percentage (ranging from 33% to 50%) of the Chinese, Korean and Japanese population possess a genetic variant of the ALDH enzyme, ALDH2, which is less active. This causes the acetaldehyde to acetate conversion stage to be less efficient, leading to a build-up of acetaldehyde in the body which is responsible for the typical Asian Flush effects and symptoms; reddening of the skin, increased heart rate, headaches and general nausea. In other words, you’re essentially experiencing a hangover straight after alcohol consumption.

Another genetic variation of ALDH2 which affects 5-7% of the population produces even more severe side effects, making alcohol consumption very unpleasant. In addition, in 80% of the East Asian population there is a prevalent ADH variation which makes the first alcohol to acetaldehyde step up to 100 times more efficient, thus further promoting the build-up of acetaldehyde in the body. It is believed it is a combination of these enzyme variants which affect the alcohol metabolism pathway that lead to the effects and symptoms seen in the East Asian population.

Research has also stated those with inactive ALDH2 mutations have a higher risk of developing oesophageal cancer from alcohol consumption than those with the active enzyme. It’s not all bad news though for Asian Flush sufferers though for the symptoms that come with it will inevitably change drinking habits, hence certain studies have shown the East Asian population are less likely to become alcohol-dependent as a result from this enzyme deficiency.

One can consider it as a warning mechanism by the body to tell you to drink in moderation.

In fact, certain pharmaceutical drugs such as disulfiram and calcium carbimide which are used to treat alcohol dependency rely on the same mechanisms of inhibiting the alcohol metabolism pathway to sway people away from alcohol consumption via the uncomfortable symptoms.

From my observations during our annual Tran Christmas lunch, I notice my mum is surprisingly not affected by Asian Flush but my dad is. Therefore I must have inherited the dominant genetic variations from him yet I must have also inherited some other traits from my mum because she displays the same affinity for drinking as me; bottles of wine tend to disappear quite quickly during these lunches. Personally I’m not concerned with my Asian Flush nor do I feel embarrassed or self-conscious whenever I go red. It does help that in my case, maybe due to other genetic factors, the typical symptoms described are much milder for the headaches and nausea do not seem to manifest. Additionally I’ve noticed a number of different factors contribute to the time it takes me to “glow”; factors such as whether I drank on an empty stomach, room temperature and the pace of a session. 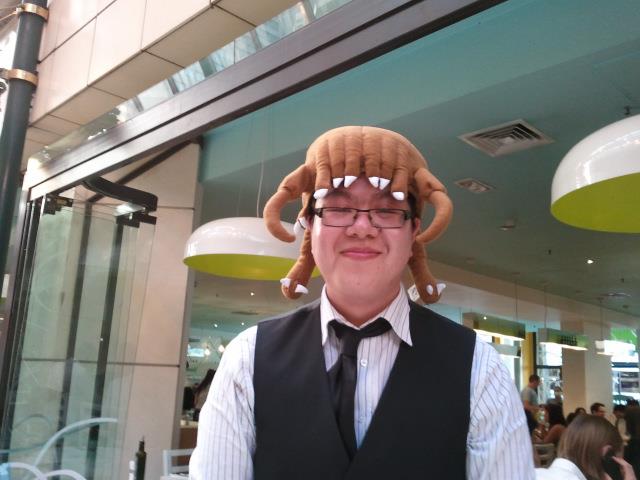 Despite this, I do understand and empathize with those who may find the symptoms more uncomfortable and those who worry it may affect their social life. In certain environments where socialising seems to be synonymous with drinking, lacking the correct alcohol metabolism enzymes may seem like quite a bad hand to win in the genetics lottery. General medical advice points towards limiting or stopping alcohol consumption completely, but for those who want or need some Dutch courage, just remember to be sensible with quantities. There are some products available which apparently can alleviate the symptoms but these seem to be verging into snake oil and placebo territories from the articles I read.