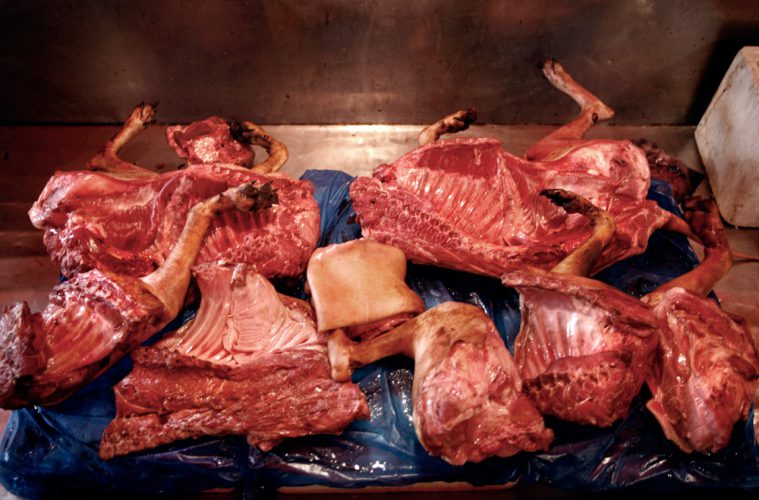 FEATURE: Eating dogs in the East – Yes it happens, but…

Why in principle should eating dog meat be seen as more shocking than eating other meats, is the cultural differentiation between the two an artificial one?

The controversy over eating dog meat is that humans and dogs have a unique friendship, we respect them above any other animal because they live and work alongside us. The sense of loyalty to that friendship in the West is what keep dogs off the menu. Dog are friends not food!

Dog’s pander for human affection, they have evolved alongside us, puppies from birth have an instinctive understanding of humans facial expressions and gestures. We treat them like cuter fluffier children. Unsurprisingly when photographs surface every year off the Yulin dog meat festivals in China, the instinctive reaction is disgust and outrage.

Most dog meat is eaten in Southern China. It is a misconception that all Chinese think eating dog meat is normal, it’s a rare delicacy that is only eaten in a few regions. The Chinese middle class are starting to adopt a more Westernise perspective on the issue as dog ownership becomes more common. Dog ownership was not permitted during the Cultural Revolution as it was seen as bourgeois, but since the early 80’s more families have begun to own dogs as pets. The Chinese are a little bit self-conscious about their canine eating habits, during the Beijing Olympics of 2008, dog meat was banned throughout the capital for the duration of the games.

Curious about this phenomenon I visited the Yangshuo meat market in Southern China, about a four-hour drive from where the Yulin Dog Meat Festival is held.

Walking into the meat market, it became apparent everything was still alive squaring barking and wriggling.

Lots of produce was being bought alive. In my opinion, this is a healthier relationship to have with your meat. Here meat does not magically appear shiny and sanitised in plastic containers. Being confronted with the real animal and the knowledge it’s going to die for your plate of food is a respectful appreciation of where your food comes from. Though it’s not the nicest. I had to weave through cages stacked on top of each other overflowing with poultry. Everything was on sale, snails, insects, frogs, ducks, eels, and yes there were dogs.

I walked in trying not to be judgmental of another culture’s tradition. Though what I saw shocked me. Two cages two meters by one meter squared held six or seven big dogs each. The Animals had to stand on top of one another the cage was so overcrowded, they looked sickly and frightened. In front of them was a few butchered carcasses already skinned. The shiny white canine teeth on the head and long naked tail confirmed they were dog meat. It struck me the dogs were intelligent enough to already understand that was going to happen to them. Sad eyes looking through the bars at their butchered friend. Though I think this was more shocking to me because it was unfamiliar.

Ducks were caged in much the same way in a stall opposite but they did not provoke the same level of shock or empathy within me.

I have been conditioned into accepting some animals suffering more than others. Western society detaches itself so much from the animals it eats, quick to be squeamish we don’t want to think about the animal. The food culture in China is very different. It is not uncommon for animals with the heads attached to be presented in restaurants for example. I personally feel this is a more respectful way to present animals, it’s an appreciation this little guy was once alive.

Back home in British supermarkets, I have come to appreciate maybe my approach to meat can be seen as the unnatural one, disassociating from the source. We are very selective about which animals and what parts of the animals. Recognisable features like feet, bones, organs we reject as if we don’t want to be reminded these animals have just features like our own. Meat is more marketable if it is not confrontational. My experience in Southern China highlighted to me the meat industry is a messy one, and though it is easier to empathise with the dogs on death row, maybe I needed to take time to consider those species of animals I do choose to eat.

It is hard to attack Western journalism that is promoting compassion for animals, even if that compassion does only extend as far as man’s best friend. The attacks on dog meat are hypocritical and highlight how warped Western cultural attitudes are in regard to meat consumption. In Yuashou China people I met there knew where their meat came from, they ensure nothing was wasted and they treat all animals the same. However, the conditions the dogs were kept in and have to endure were inhumane. It was harder to ignore that cruelty because it was unfamiliar, and it raised more questions than answers about why I was numb to the suffering of some animals than others.