TV leads the industry in diverse casts and storytelling

Fair representation and diversity is something that Hollywood has struggled with for years–and continues to struggle with even today. In the past, blackface and yellowface were pervasive through classic movies and TV shows. Now when distinctly non-white characters are whitewashed out, controversy sparks across social media. Tilda Swinton is the “Ancient One” in the upcoming Marvel movie, Doctor Strange. Emma Stone’s character was supposed to be half Asian and half White in Aloha. Robert Downey Jr. portrayed an actor who purposely wore blackface in Tropic Thunder. And Johnny Depp played Tonto in the latest reboot of The Lone Ranger. 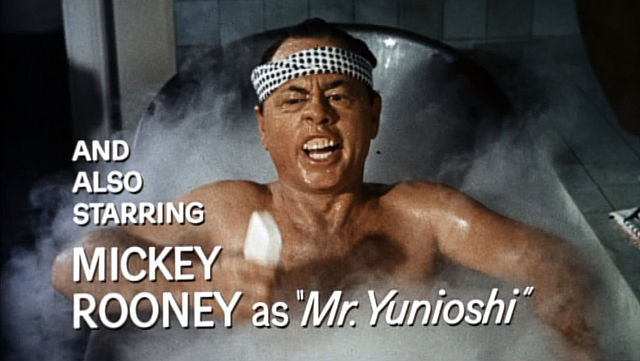 Mickey Rooney in Breakfast at Tiffany’s (1961)

It all came to a boiling point during the 2016 Oscars where the nominations were notably pale. Straight Outta Compton and Creed both had limited nominations (strictly to white contributors even though they feature Black lead actors and directors). Idris Elba was snubbed a nomination for his supporting role in Beasts of No Nation. And Will Smith didn’t receive a nomination for the lead role in Concussion. After nominations were announced, Twitter erupted with the hashtag #OscarsSoWhite to highlight outrage over the Academy’s choices. Oscars host Chris Rock even rewrote his whole show to acknowledge this fact. The Academy, and its president Cheryl Boone Isaacs, recently combated the controversy by inviting a large, diverse class of new members. It is a start to catch up to the broader culture, but it needed to start sooner.

It’s important to have a diverse representation of races, cultures and backgrounds in media. When you see a positive portrayal of yourself in the media, it helps feel like your experience and story is valued within the popular culture. For most of my childhood growing up in the United States, I had very few Asian role models in pop culture. I remember proudly having a Mulan birthday cake for both movie releases!

In TV, things have been advancing more quickly than their feature film counterpart. They lead the industry through accepting alternative TV formats and encouraging development of original content.

We are in the second golden age of television with so many options to watch: network, cable, premium cable (HBO, Showtime, Starz), and streaming websites (Netflix, Amazon, Hulu). As a result, more stories are told than before and more series’ are launched and loved by the public. And it has been evident that shows with diversity thrive. Shondaland’s suite of TV shows feature strong female leads, characters with depth, and complex storytelling. Grey’s Anatomy, Scandal, and How To Get Away With Murder won Emmys in categories like Outstanding Lead Actress and Outstanding Drama Series. Also, JJ Abrams has encouraged diverse casts like in the new Star Wars: The Force Awakens and Lost.

Shows that represent different perspectives are making an impact: for individuals, for the industry, and for the culture. People get exposure to experiences and perspectives they had no clue about before and others can identify deeply with the show.

Anthony Anderson stars in this family sitcom where he struggles between his cultural identity and those of his kids. It has received three Emmy nominations: Outstanding Comedy Series, Lead Actor and Actress in a Comedy Series.

It touches a lot on attempting to fulfill certain cultural expectations by others in a comedic way. In this clip, the parents Dre & Bow (played by Anderson and Tracee Ellis-Ross) take their neighbors to a black church–even though they don’t regularly attend.

Josh happens to be Filipino and the show doesn’t tokenize or fetishize that character trait.  A notable episode was the Thanksgiving one where Rebecca (played by Bloom) goes to Josh’s family for the holiday. It does a great job of showing the depth of the Filipino culture in pockets of LA. Below is a song from the episode (in the style Nicki Minaj), where she explains how she’ll impress Josh’s parents.

Aziz Ansari and Alan Yang’s Master of None is an artful depiction of life as second generation Millennials surviving the city through many common themes. It received four Emmy nominations for Outstanding Comedy Series, Lead Actor, Writing and Directing for a Comedy Series. This is the first time someone of South Asian descent is nominated for a male lead acting category. Each episode is centered around a certain theme with relevant insight to today’s world. My favorite episode was “Parents” where the two second generation characters delve into their parents’ experience. Below is the teaser for the episode.

Ansari’s response to the nominations with Vulture were of excitement and shock–they didn’t expect such a positive reaction to their show. He views it as a personal project and is happy to be in the company of other great and diverse shows:

“There’s so much diversity at the Emmys. Like, there’s no #EmmysSoWhite…The Emmys are real.”

Nominated for Outstanding Actress in a Short Form Comedy or Drama Series, Michelle Ang is an actress of Chinese Malaysian descent. Ang plays a tense yet suspicious passenger in the first episode of the web series below. Her role extended into season 2 of Fear the Walking Dead.

Fresh Off the Boat

ABC’s comedy series Fresh Off the Boat surprisingly did not snag any Emmy nominations in its second season. Constance Wu’s performance as Jessica Huang was a popular choice during pre-nomination buzz.

This is only the second Asian-American family sitcom on network TV (after Margaret Cho’s All American Girl in 1994).