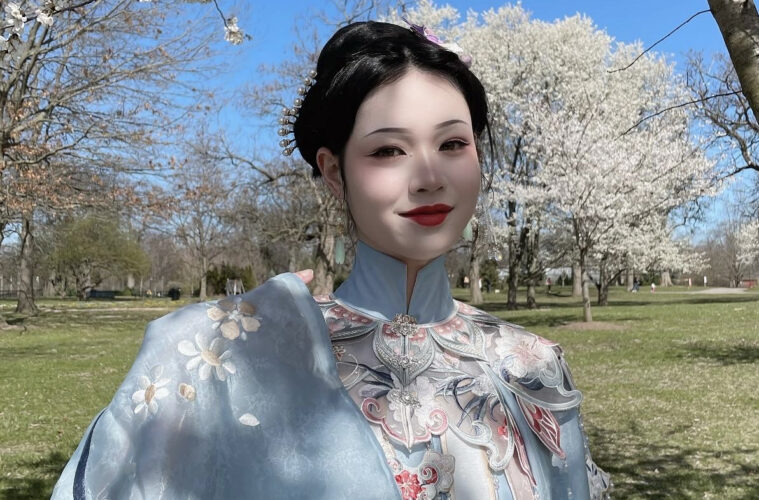 Spellbinding in Hanfu: ChuYan shares her passion and love for hanfu

At only 22 years old, US-based ChuYan’s TikTok videos have drawn in millions of viewers under the handle @mochihanfu, inspiring so many Chinese diaspora (and others!) with her spellbinding showcases of hanfu, history and mythology. She transforms into princesses, goddesses and ethereal spirits, enticing the viewer with her narrative power and fascinating facts. At a young age, her mother helped instil within her an affinity for her heritage; she grew up learning the language and appreciating the rich tapestry of stories such as the Journey to the West (the tale of the Monkey King). Yet, through the internet, something which seemed beyond her reach, a creative career, became a reality. Her own journey is not showing any signs of slowing down; more recently, she opened a hanfu online store NüWa, giving audience members the chance to pick up their own historically-accurate hanfu. 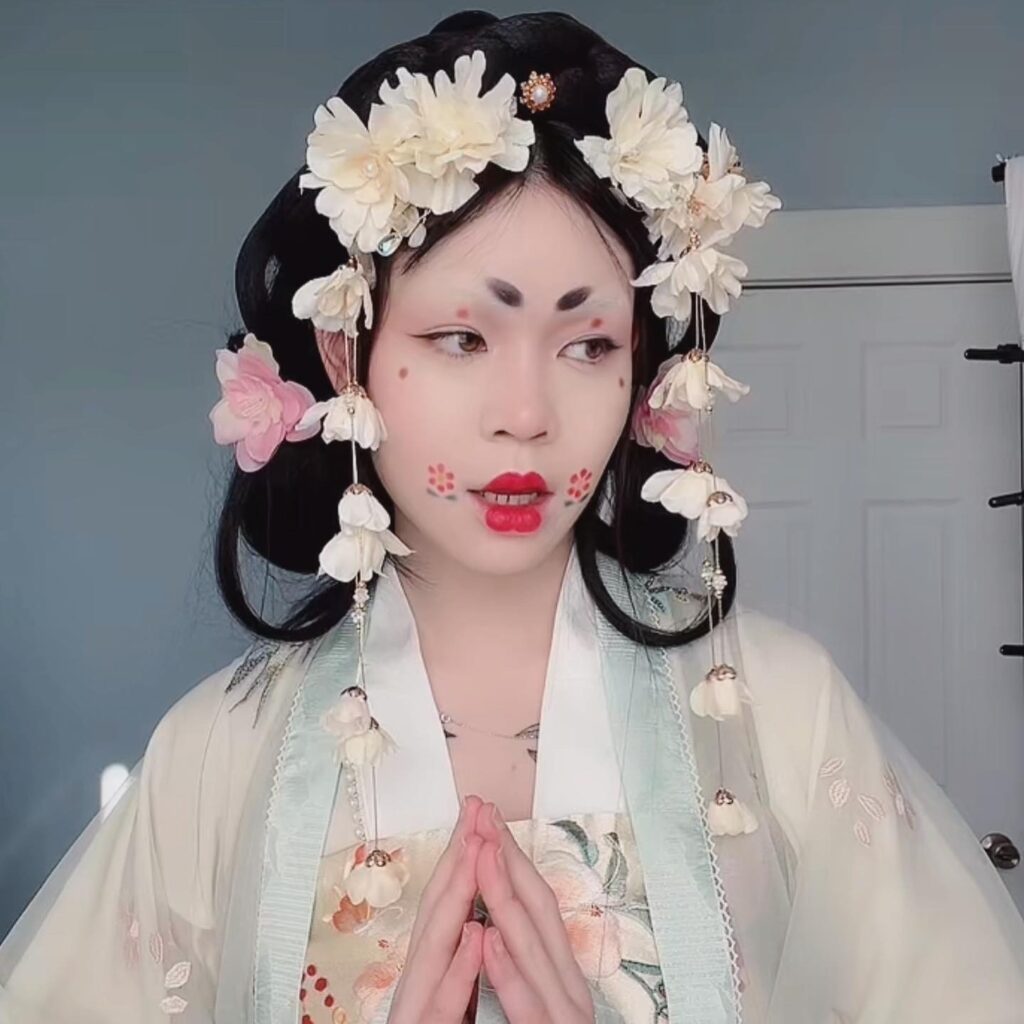 Keen to learn more about this young, talented and enthusiastic entrepreneur and content creator, I had the privilege of interviewing ChuYan virtually about her aspirations and challenges. Fascinatingly, hanfu was not something that ChuYan was actively aware of until 2021. Anime (such as Studio Ghibli) was a huge factor behind ChuYan’s initial love of historic costuming from the East, particularly the Princess Kaguya movie with its detailed and flowing garments animated in such majestic and magical ways. ChuYan found herself drawn to the kimono and then with more Korean drama exposure, to the hanbok. She then found herself during the pandemic watching more Chinese dramas and fell instantly in love with the hanfu. With the onset of COVID-19 and lockdowns happening internationally, ChuYan began making videos about her newfound passion and began to amass a huge following. As she continued pushing through content, she realised this would be her path moving forwards: sharing the beauty of her culture and the associated traditional wear. 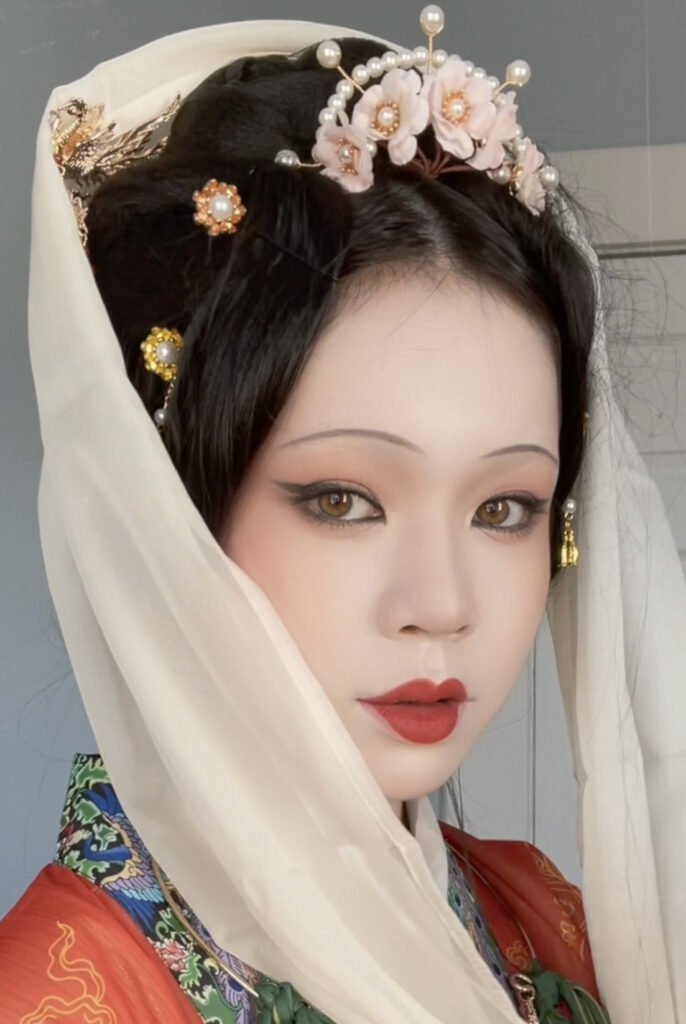 However the path to her current situation was not always smooth. Coming from a traditional Asian family, ChuYan was expected to treat arts as a hobby and not a serious career choice. Yet, her sense of self belief and the reception she received on her videos seemed to showcase a promising alternative to more “stable” jobs. Previously, ChuYan took on two jobs to “make ends meet”. Hard working, she had always worked through high school and college and the expectation was for her to become a nurse rather than to remain a TikToker. Thus, convincing a sceptical mother with predefined conceptions of what constitutes a solid job was… not exactly easy. Yet, ChuYan had been able to gain financial independence, securing her own home with her husband and their “cat child” Mochi, and with a shop newly opened, she managed to get her parents’ approval.

And thank goodness she is doing what she is doing today. Like many Chinese women growing up in the West, it was hard for me to feel “seen” with the lack of representation on television screens and blockbuster films. Yet, because of women such as ChuYan taking things into their own hands, the same may not be said for the next generation. ChuYan noted “probably the most meaningful comment I’ve received so far was an Asian girl who messaged me to say that she felt insecure about her small eyes. She said that after she saw my video, she started to feel pride about her features. It was so heart-warming and it hit me hard that my videos could have such an impact on people. I originally wanted to create my videos to educate, as I felt the fastest way to learn something well is to make content to teach others, but it dawned on me that I was also having a positive impact on how Chinese women saw themselves”. 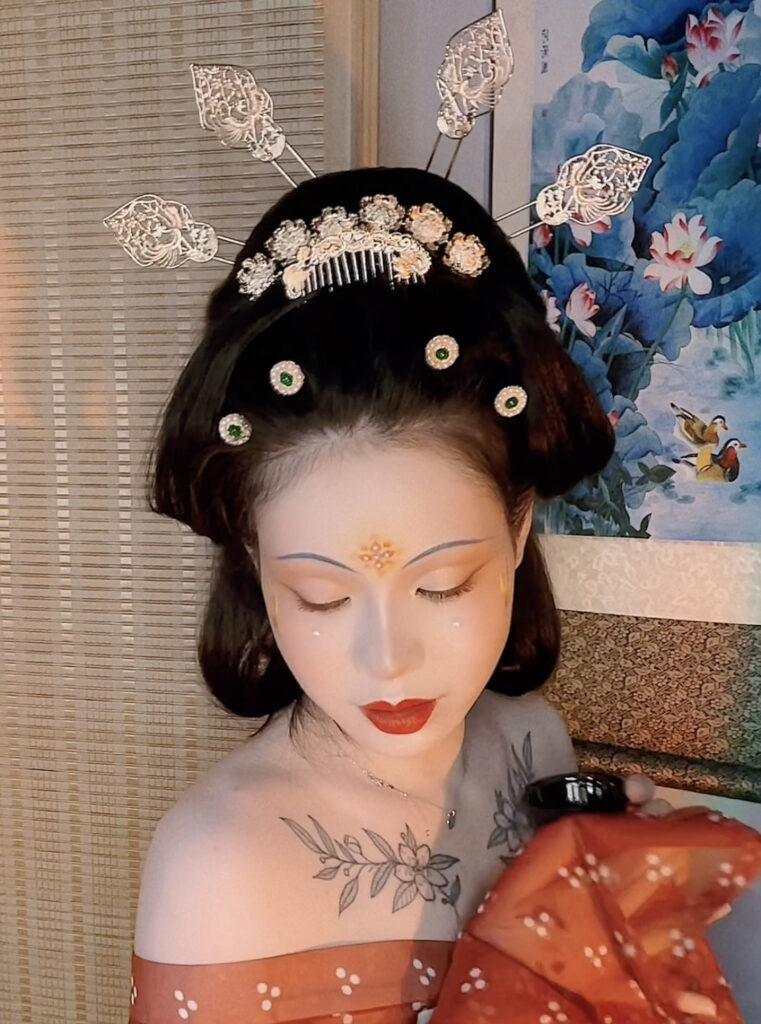 By setting up her shop, ChuYan is able to bring hanfu to Chinese women in America. For her, inclusivity is a priority as she tries to resource hanfu of different shapes, styles and sizes. When asked about her view on non-Chinese wearing hanfu, ChuYan took a moment to reflect on her views. She admits “my opinion has changed about 10 to 12 times already. At the beginning, I felt that it was fine for everyone to wear it. However, after I started to see how hanfu was being sexualised and gentrified, even culturally appropriated, and I thought, wait a second… this might not be okay. However after seeing how some people take time and care to ensure they wear it the right way, it made me think that, yes, it can be appreciated by a wider audience. Now, I am thinking it is fine depending on the intention of the wearer, the location of where it is worn, and if it is done with respect. I think I would find it inappropriate if people are wearing a hanfu as a Halloween costume, for example. Where you source the hanfu will be important too, for example, whether you are supporting a Chinese-owned business or just getting it off some global conglomerate website.”

Founding her own business has not been easy, as ChuYan has been facing issues getting around shipping arrangements across the globe. She feels lucky that many have helped her on the way and she sourced a few of her hanfu for her shop from recommendations from followers. She also put her husband’s web skills to use as he designed the website for ChuYan. Additionally, ChuYan wanted her store’s focus to be on historically accurate hanfu. She feels a lot of hanfu seem quite costume-like or “fancy dress”. Instead, she wanted to make efforts to show the traditional side of the pieces, and make it accessible to a wider range of Chinese diaspora on the basis of tapping into one’s culture rather than a cosplay opportunity. She found that “a lot of people learn about hanfu and are surprised how much variety it is, especially as people often immediately think of qipao. There’s a whole world out there to explore, and I hope to help others delve into it with me.”

I also wanted to learn more about ChuYan’s choice of name for her store. Nüwa, the name is taken from the mother goddess of Chinese mythology who is said to have created humanity. Although she had a list of candidates, ChuYan said “I always knew that it would be her in the end. She is the queen. I really resonate with her because although she is married, all her accomplishments are her own. She is a strong woman who is independent and a creator, making humans and saving them too. Such a boss!” ChuYan’s favourite mythological being though, apart from Nüwa, is piggy from the Journey to the West. She loves that he works hard and plays hard, something to which ChuYan herself commits.

In ChuYan’s spare time, she loves playing Stardew Valley with her supportive husband, a fun farming game. Even in the metaverse, she is industrious and entrepreneurial and is aiming to amass her own mayonnaise empire. She is also daydreaming about new goals, including a few bucket list items such as walking in a hanfu fashion show in China and designing her own modernised hanfu for her store. Her aspiration is to visit the stunning Suzhou, donned the “Venice of China” with its waterways and stunning bridges and boats. ChuYan dreams of going there for its hanfu festival. 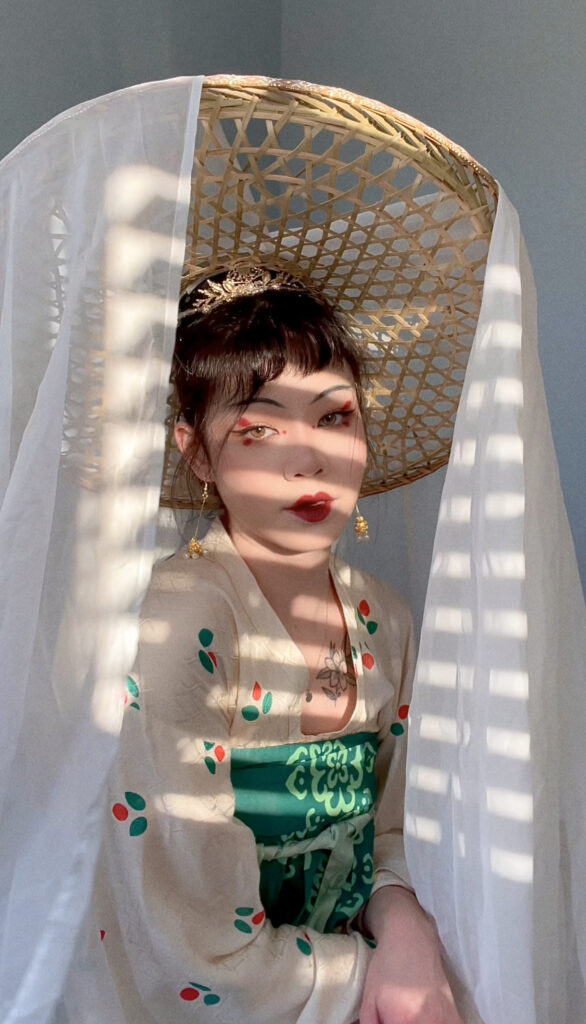 What I admire about ChuYan is her willingness to learn, her sense of self-belief and love of trying new things, and her passion for creativity. Even though her shop has not been open for long, she has been seeing such positive feedback and great results. She is a businesswoman with a keen vision, capitalising on her creative endeavours on TikTok to bring people closer to the beautiful clothing of ancient China. She has managed to cover so many styles in her videos, including (but not limited to) the Ming dynasty (which used to be her favourite dynasty) and Tang dynasty (now ChuYan’s favourite given the relative freedom and powers of women throughout). She even has filmed a cameo with her cat Mochi dressed up in hanfu garb! ChuYan also continually improves upon everything she does, whether it is finding fun ways to engage her audience or perfecting her makeup skills. She has found the makeup styles quite challenging to master, including the forehead illustrations often accompanying traditional outfits. Keeping content constantly fresh and visually stunning is no small feat and ChuYan churns it out on an almost industrial scale.

An inspiring talent with such an infectious love of hanfu, ChuYan has already within a span of simply a year, done so much for many generations of Chinese diaspora women looking to get in touch with tradition. To meet with ChuYan and hear about her journey, hopes and insights was an absolute pleasure – seeing such large parts of the new generation of Chinese women engage with hanfu and feel beautiful, seen and inspired, is a treasure to behold.