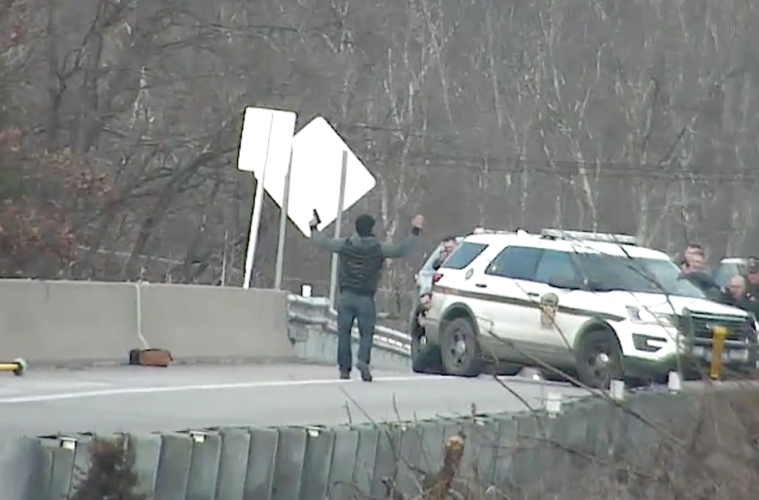 Chinese American teenager Christian Hall had his hands in the air before Pennsylvania State Police fatally shot him.

In the clip, Hall is seen standing on the ledge of a highway overpass in northeastern Pennsylvania. Hall had been diagnosed with depression.

Police officers are seen arriving on scene, persuading him to stand down. After troopers saw Hall was armed, they began backing away.

It was later discovered that Hall’s weapon was a realistic pellet gun.

Previous footage showed Hall raising his hands in the air with the gun in his hand after an officer fired bullets that hit the bridge. The final seconds of the footage were blurred out by authorities.

The Monroe County district attorney concluded that the police shooting was justified as he lives of the troopers on scene were in danger.

New unedited footage now shows Hall held his hands above his head for 14 seconds before troopers fired shots that ultimately killed him.

Hall’s parents are now suing the troopers who shot their son, releasing the full video in the hope that his death sparks further investigation.

Both parents maintain their son did not point a weapon at the police.

Ben Crump and Devon M. Jacob, who were the lawyers for George Floyd’s family are now representing Hall’s parents.

“Everybody knows when you put your hands in the air that’s the universal sign of surrender,” Crump said. “Why use the most excessive force?”

Jacob said PA State police “weren’t equipped or trained on how to end the incident in a safe way.”

“Pennsylvania State Police shot and killed an individual who was clearly surrendering which is an unlawful homicide,” Jacob added.