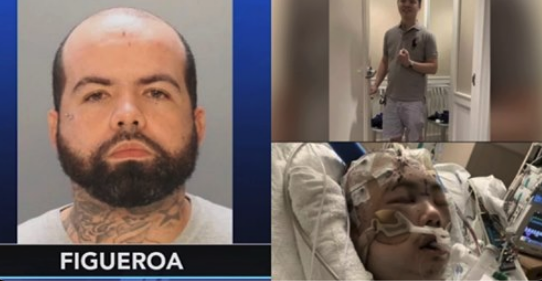 A 28-year-old Asian man has been killed after being punched in the head.

On Monday 24 May, an employee of Wei Lin’s restaurant was making a food delivery at an intersection in Philadelphia.

After getting into a car accident, the employee who did not speak English, called Lin to help communicate with the other driver.

Lin called the police and exchanged information with the woman who was driving the car.

Suddenly, a man appeared on the scene and punched Lin in the head, causing him to collapse.

“During the delivering process, he got into a car accident,” said the victim’s wife, Mrs. Zhang, said about the delivery driver.

“The suspect came out of nowhere,” Zhang says of a man who arrived on the scene when police weren’t there.

“It was a fist and a really heavy hit at my husband’s head,” recounts Zhang of the story the delivery driver told, detailing how a man who was a relative of the other driver approached Lin and punched him in the head.

“My husband collapsed,” said Zhang, who got a call about the incident at the couple’s restaurant.

John Chin, executive director of the Philadelphia Chinatown Development Corporation, said the police initially did not understand the severity of the incident.

“At the beginning, police just treated it as a fender bender little,” said Chin. “Our agency notified police and said, ‘Hey this fender bender became a very violent incident against a male victim.’”

Lin was hospitalized and remained unconscious with severe brain damage for three days before passing away on Thursday 27 May.

Police have since arrested Jose Figueroa of Hunting Park and charged him with manslaughter, but are not investigating the case as a hate crime.

“He was so kind,” said Zhang’s wife of her husband. “Whenever his friends needed help, he tried his best to help them.”

“One of my children is only 3 months old and the other 19 months,” she continued, “so it has been a nightmare for us. We don’t know what to do next.”

In related news, a 25-year-old Asian woman shot and killed one week before her birthday.