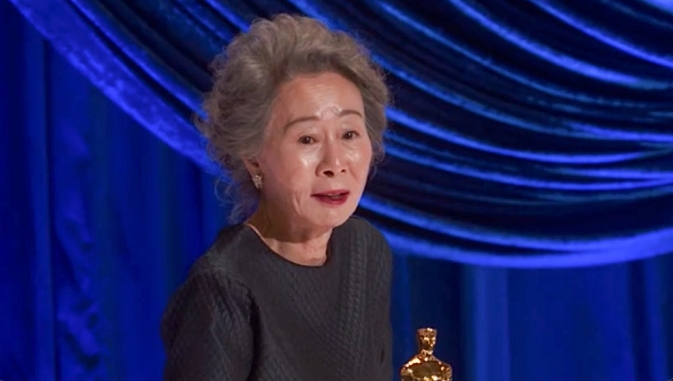 Accepting her award from Brad Pitt, Youn said it was an honour to meet the American movie star.

“Mr Brad Pitt, finally, nice to meet you,” she said to the actor, as she stepped up to the podium.

“Where were you while we were filming in Tulsa? It’s an honour to meet you.”

However, Youn then went on to correct the western world about the pronunciation of her name.

“As you know, I’m from Korea, and actually my name is Yuh-Jung Youn,” Youn said. “Tonight, you are all forgiven.”

Lee Isaac Chung’s film is a semi-autobiographical movie, which tells the tale of a Korean American family moving to rural Arkansas.

“Me, being here by myself, I cannot believe I’m here … let me pull myself together,” she continued, before thanking the Academy.

“I don’t believe in competition,” Youn added, saying she was shocked to have beaten nominee Glenn Close.

In related news, Nomadland director Chloe Zhao has made history by becoming the first Asian woman to win a Best Director Academy Award.