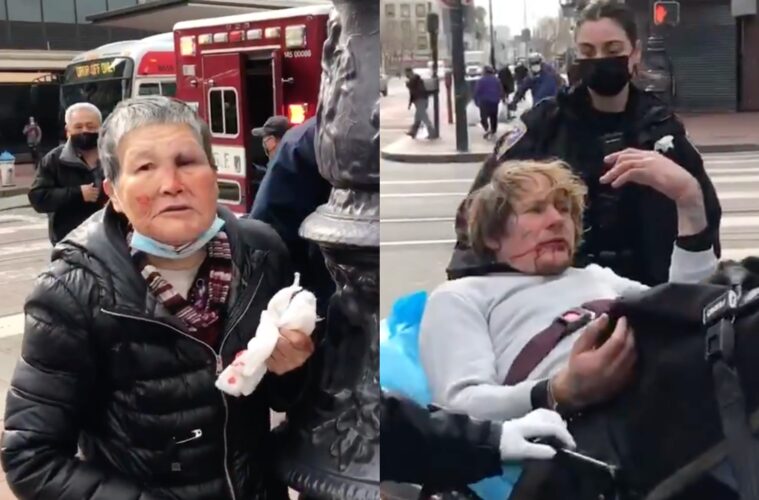 An elderly Asian woman has hospitalised her attacker in San Francisco.

Xiao Zhen Xie was punched in the face by a 39-year-old white male on San Francisco’s Market Street while she waited to cross at a traffic light.

The 76-year-old fought back and witnesses said they saw her pummelling the man in retaliation.  She picked up a wooden paddle she found on the side of the road and continued hitting him with it.

In the video, Xie is heard shouting at the man in Cantonese, “You bum, why did you hit me?”

The assailant, who has not been publicly named, also attacked an 83-year-old Asian man just before his confrontation with Xie.

Xie’s daughter Li said her mother is not able to see out of her left eye and has been unable to eat.

“[Xie] is very traumatized, very scared and this eye is still bleeding,” Li said. “The right eye still cannot see anything and still bleeding and we have something to absorb the bleeding.”

Her grandson John Chen has started a GoFundMe page to raise funds for her medical treatment and therapy.

“She is now suffering two serious black eyes and one that is bleeding unstoppably. Her wrist has also swelled up. She has been severely affected mentally, physically, and emotionally,” Chen wrote.

Chen said his grandmother is “afraid to step out of her home from now on.”

“I am amazed by her bravery. She was the one that defended herself from this unprovoked attack,” he said.

Police are investigating whether the attack was racially motivated.

Most recently, an Asian college student was slashed in the hand while she was walking home in Brooklyn.

In other news, eight women have been shot and killed at three massage parlours in Atlanta.

Just came upon an attack on an elderly Asian woman on Market Street San Francisco. Effort I got more details pic.twitter.com/5o8r0eeHE2