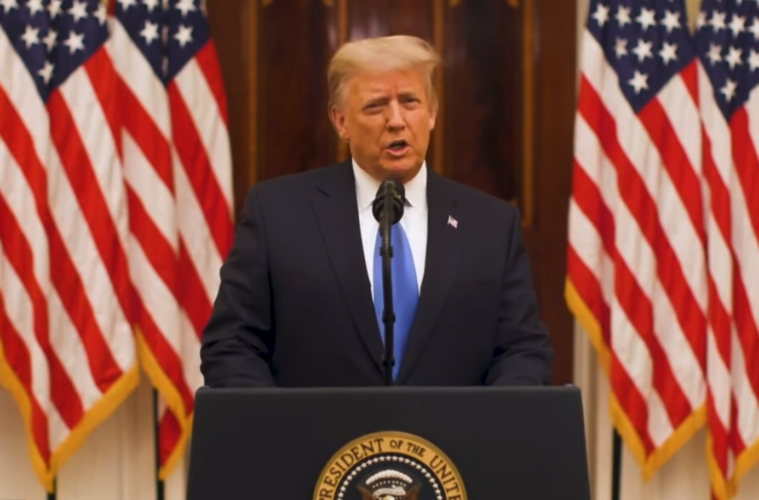 "It’s a horrible thing that was put onto the world. We all know where it came from"

In his speech, Trump presented an overview of his term as the 45th POTUS. “Four years ago, we launched a great national effort to rebuild our country, to renew its spirit, and to restore the allegiance of this government to its citizens. In short, we embarked on a mission to make America great again — for all Americans,” Trump began.

“As I conclude my term as the 45th President of the United States, I stand before you truly proud of what we have achieved together. We did what we came here to do — and so much more.”

Looking back over his term, Trump highlighted how he “passed the largest package of tax cuts and reforms in American history” and “slashed more job-killing regulations than any administration had ever done before.”

“We fixed our broken trade deals, withdrew from the horrible Trans-Pacific Partnership and the impossible Paris Climate Accord, renegotiated the one-sided South Korea deal, and we replaced NAFTA with the groundbreaking USMCA — that’s Mexico and Canada — a deal that’s worked out very, very well.”

Trump then went on to discuss China, stating that “very importantly, we imposed historic and monumental tariffs on China; made a great new deal with China.”

He then instantly referenced the Coronavirus but termed it “China Virus” again.

“But before the ink was even dry, we and the whole world got hit with the China virus. Our trade relationship was rapidly changing, billions and billions of dollars were pouring into the U.S., but the virus forced us to go in a different direction.”

Trump ended his speech by stating, “I go from this majestic place with a loyal and joyful heart, an optimistic spirit, and a supreme confidence that for our country and for our children, the best is yet to come.”

“Thank you, and farewell. God bless you. God bless the United States of America.”

On Wednesday morning, Trump also delivered a send-off speech in Maryland in which he called Coronavirus “the China virus,” whilst adding, “it’s a horrible thing that was put onto the world. We all know where it came from.”

“Goodbye, we love you, we will be back in some form,” Trump said as his final words.

In recent news, owners of a Vietnamese restaurant in Chicago have received hate mail and death threats after attending a pro-Trump rally.