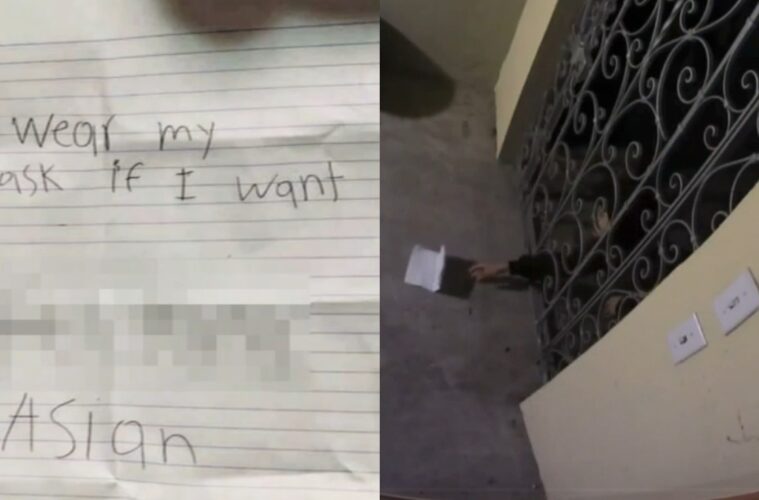 An Asian American mother was given a racist letter and had her home vandalized in San Francisco.

The victim, identified only as Marie, was walking her infant twins down the street on Monday. A young man approached her without a mask so Marie asked him to put one on.

Refusing, the man became aggressive and began chasing her.

“It was quite alarming, he locked eyes with me and immediately started charging up the hill,” she said.

Terrified, Marie ran home and her husband chased the man away.

The man then returned to the house throwing a water bottle and an egg at it. He then left a letter which read, “Keep America without Asians”.

“I wear my mask if I want FUCKING ASIAN you create the virus,” the letter continued.

San Francisco Police Department said the incident was “racially motivated” and confirmed that their special investigations division is looking into it.

Marie has advised others who have experienced racism to come forward.

“If you experience the same thing please report it,” Marie said.

“It’s really natural to be fearful but if we don’t speak out no one is going to know this is happening and no one can do anything about it.”

“I really hope for him is that he finds it in himself to get some help,” she said.

“Go to the police or find a therapist but I just really don’t want this to happen to anyone else in our neighborhood or in our country. I just really want us to be safe.”

Ohio State University has released a study looking into why Asian Americans are being blamed for the Coronavirus.

In other news, a Joe Biden supporter has been caught on camera spewing anti-Asian hate in New York.