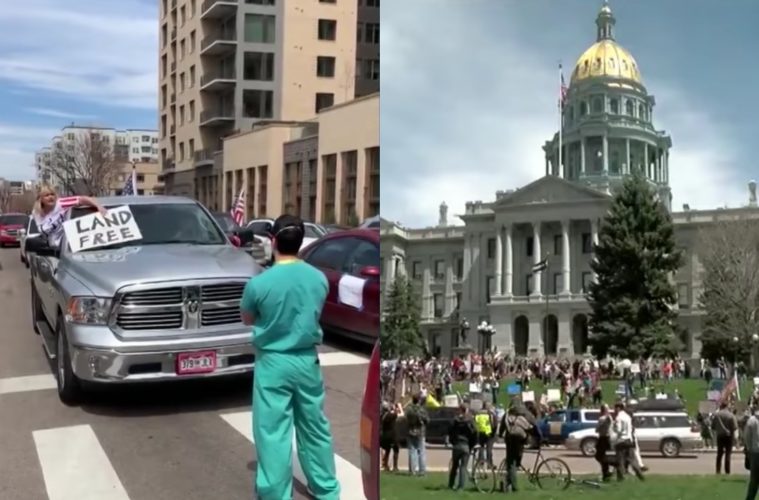 NBC reports that Coronavirus lockdown protestors were seen shouting “go to China” as they clashed with health workers.

On Sunday, protestors gathered outside of the State Capitol in Denver to express their frustration with the lockdown.

A video from the rally has since gone viral in which a woman wearing an American flag T-shirt and holding a “land of the free” sign is seen shouting at a health worker.

In an attempt to combat the rally, the health worker sporting a mask and scrubs stood in front of her car.

The woman leans out of the car window, slamming her sign on her windshield.

“Go to China if you want communism,” she shouts at the health worker. “You go to work, why can’t I?”

Hundreds attended the four hour protest in Colorado – a state in which 400 people have died from Covid-19.

Denver’s stay-at-home order ends on 30 April but the city may extend the order for another few months.

“This state has been locked down long enough,” she said. “There are families hurting. There are businesses hurting. We can’t pay our bills. The statistics don’t support us staying locked down anymore.”

Children were also seen at the rally demanding for their schools to be re-opened.

A nurse who spoke out against the protestors said the demonstration felt like “a slap in the face to medical workers” and was “backwards.”

“I don’t want to be stuck in my house either. I don’t think many people at all are enjoying this. That’s not the point,” she said.

In related news, a British woman has documented her experience with Coronavirus racism at a UK supermarket.