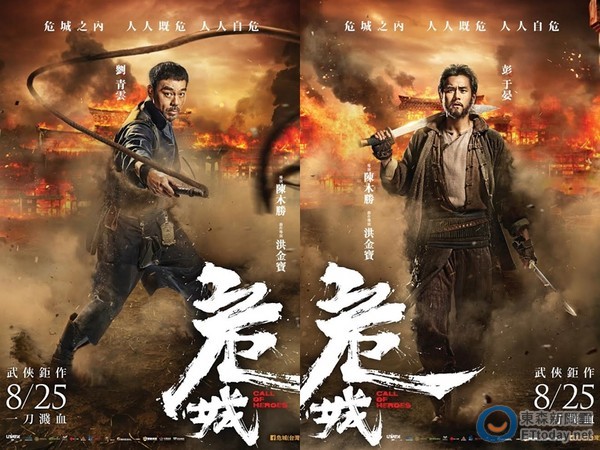 Benny Chan weaves elements of Sergio Leone and Akira Kurosawa into his good old fashioned tale of good vs evil and reminds us of a by-gone era of Hong Kong martial-arts cinema.

Call of Heroes is essentially a Western in a period Chinese setting. Set in the 1910s, Yeung Hak Nan (Sean Lau), the chief protector or “sheriff” in the English subtitles, of the small town of Pucheng faces a moral dilemma.  One day the evil crackling trigger-happy Cho Siu-Lun (Louis Koo), enters the village and murders 3 innocents randomly. Having been caught and sentenced to death, we find out he is the son of a prominent warlord and is a big deal himself. Thus Hak Nan and the village are given a day to release him otherwise Cho Siu-Lun’s army will massacre and unleash hell on Pucheng. The indifferent lone wanderer Ma Fung (Eddie Peng) finds himself in the village at the same time but slowly becomes more invested in the situation than anticipated. Should Hak Nan release Cho Siu-Lun to save the village or uphold the law? 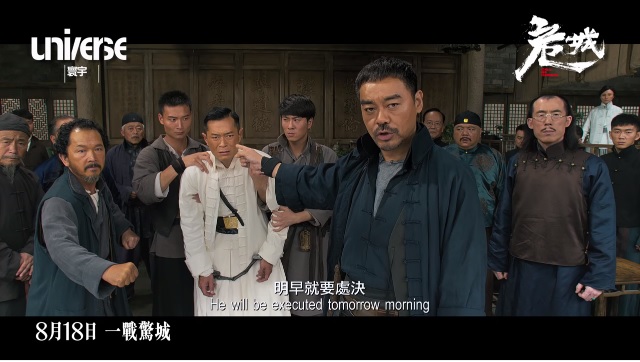 As martial-arts flicks go, Call of Heroes certainly delivers and the fight scenes orchestrated by Sammo Hung are exhilarating and well executed. It’s refreshing to see wirework back on the big screen again for soft elements of wuxia are incorporated into the movie as we see fighters glide effortlessly into the air and perform inhuman feats of acrobatics. The prison raid and water walkway fights are special stand-out scenes. Call of Heroes exhibit an atmosphere not too dissimilar to the martial arts movies of the golden age of Hong Kong cinema. The only thing that taints the action is some of the questionable CGI, especially during Eddie Peng’s and Wu Jing’s duel on top of Mount Clay Pot.

For a martial arts movie, the story is interesting and unique enough to keep the audience engaged despite the lack of originality. Like many Hong Kong movies, there are some tonal gymnastics albeit the obligatory comedy/slapstick isn’t as cringy as I anticipated plus I thought the melodramatic sections displayed some really good acting (special shout out to Liu Kai Lin). Sean Lau is as reliable as always, beating bad guys up with a whip in his first martial arts movie in nearly two decades. I was personally disappointed with Louis Koo’s character though. There was much potential for him to go full Nic Cage but instead he just crackles and waves his gold plated pistol in a hammy cartoon-like fashion throughout the movie. 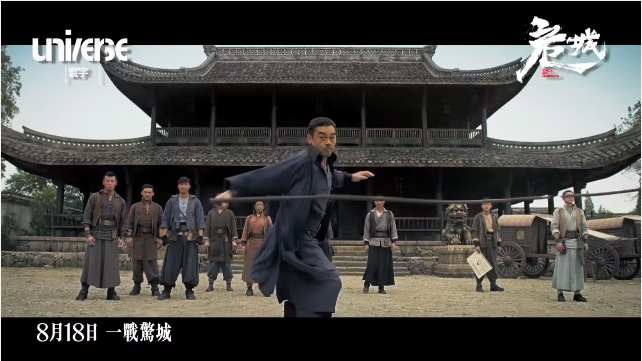 Call of Heroes’ high production value can be seen by the Pucheng village set which apparently took 5 months to construct thus making the setting very real and authentic; much like the purposely built Taiwanese sets of the Shaw Brothers in the 60s and 70s. Wong Kin Wai’s film score oozes aspects of Ennio Morricone to keep in line with setting, the High Noon inspired plot and the range of Western characters (the sheriff, the lone wanderer etc) we encounter. There’s even a scene when the main heroes ride off together in the sunset.

All in all, despite the predictable storyline and tropes, Call of Heroes is still a very thrilling and exciting feature because at the end of the day, the main attraction will always be the fight sequences. For any fans who want to recapture the distinct magic of old school Hong Kong martial arts cinema with a twist, I highly recommend seeing this.