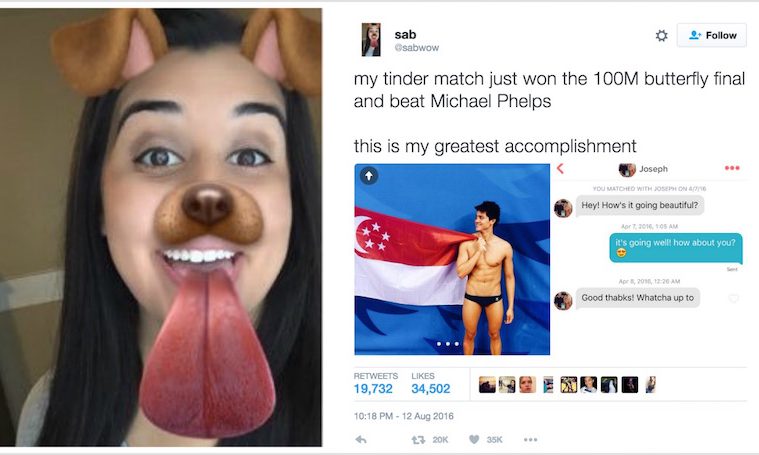 A woman who matched with Joseph Schooling on Tinder is regretting not responding after the athlete won Singapore’s first ever gold medal.

Schooling won the 100m butterfly with a time of 50.39 seconds, beating pervious record holder, Michael Phelps, who won his first silver in Rio with 51.34. The 21 swimmer from Singapore won the country’s first ever gold medal.

However, whilst luck was on his side in the pool, his luck with one woman on dating app Tinder was missing. The woman, who had matched with the gold medalist in April 2016, had initially ignored the swimmer’s messages after the swimmer initiated the conversation. Now Schooling has proved himself to be a legend in his country and has etched his name into Olympics history, the woman is now deeply regretting giving him the cold shoulder.

The dating app user, who goes by the name of Sab on Twitter, shared a screenshot of their conversation, with the captions “my tinder match just won the 100M butterfly final and beat Michael Phelps… this is my greatest accomplishment…and not replying to his message was my greatest failure”.

this is my greatest accomplishment pic.twitter.com/bhU96gmflO

and not replying to his message was my greatest failure

The woman’s Tweet has since gone viral with over 71,000 likes in just over a day, with mixed responses. Some have expressed pity Sab, whilst others are less sympathetic. Some have taken her experience as a lesson in their own Tinder strategies.

@sabwow how did you not reply HES A FINE ASS MAN