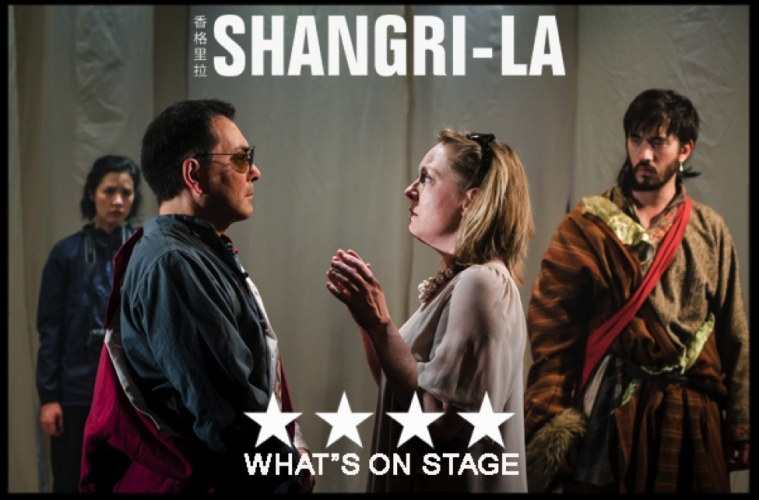 I have been to ‘Shangri-La’. No, not the hotel at The Shard, but the picturesque city of Zhongdian in Yunnan, China.

It was a breath-taking experience, as I trotted through ancient towns, snow-blanketed mountains, and meadows with boundary so far away they looked like matte paintings. So imagine my surprise when I saw, as I was resting in a 130-renminbi-a-night yurt, the folks of Shangri-La texting with their mobile phones while donned in traditional Nashi dresses. What about authenticity? Are they just doing this for the tourists? How could they! Meanwhile I’d like a coke, butter tea is just unpleasant.

‘Shangri-La’ provides a rare insight into the intricate relationship between cultural taboos and personal freedom in the titular city, a contradiction of cultural tourism.

This 70-minute play promises a burst of self-questioning for anyone seeking an authentic, uncapitalistic experience in an oriental city. Referencing the 1933 novel Lost Horizon by James Hilton, the city of Zhongdian changed its name to the mystical “Shangri-La” in 2001, in itself an effort to boost tourism.
Bunny is a young, indigenous woman who tries to escape her life as it is destroyed by mass tourism, while Western tourists try to escape their own by entering ‘Shangri-La’, seeking an ethereal taste of authenticity. They inevitably clash and have to face the important question: is culture sellable?

The play masterfully transports the audience to imaginative locations of Shangri-La, with a more or less empty stage and the performance of a talented ensemble.

I’d remark in particular Andrew Koji’s outstanding performance as Karma, as he transforms effortlessly from a callous and mercenary rebel to a warm and servile tour guide, demonstrating a nuanced, acting-within-acting performance, which is a thrill to watch.

‘Shangri-La’ attempts to tackle the problem of having to speak multiple languages by having the players speak English throughout the show, but employ different accents and standards of English to suspend the our disbelief. A commendable and effective technique, but do take care of the occasional slip-ups.

‘Shangri-La’ is based on playwright Amy Ng’s personal experience and is her first full-length play. The play runs at Finborough Theatre for the last time tonight at 7:30pm, 6 August and is directed by acclaimed director Charlotte Westenra.