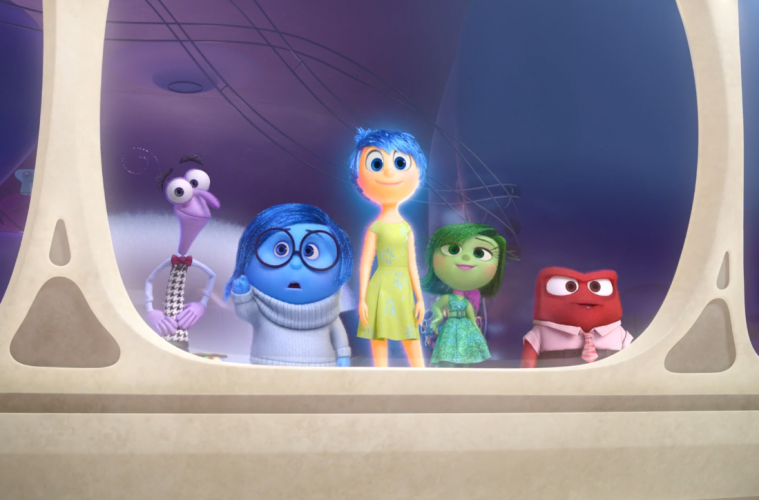 FEATURE: The genius of Pixar’s “Inside out”

Why Pixar’s “Inside out” was such an important film

A year ago I managed to watch Pixar’s latest offering Inside Out (2015). Going in to the cinema I never realized how much this film would change my life.

Like many of my generation, I have grown up on Pixar films. From Toy story (1995) to Finding Nemo (2004) to Up (2009), I’ve seen them all.  As a child I fondly remember watching Toy Story at the cinema with my family and being captivated with the idea that my toys were alive and running around having adventures.

Pixar Studios has a gift for telling stories that audiences invest with characters we truly care about, even as adults. This seems to be a contrast to a lot of blockbusters where the whole world is at stake but there is little audience investment in the human element.

I think what makes Pixar films so good, is the way it approaches really tough subjects. Simply dealing with the emotions of life, and how that changes you and telling it in a way that resonates with adults and children differently is amazing. To their credit, the fact Disney has allowed Pixar to do what Pixar does so well in telling “real” stories is the best decision that studio has made.

The last few years has seen a trend in a lot of children films towards undoing the whole “believe in yourself and all your dreams will come true” thing. First we had Wreck It Ralph (2012), a film whose basic message was “sometimes you’re the one who gets stuck with the rubbish job but you at least deserve respect for doing it,” and then we had Monsters University (2013) whose message was “no matter how badly you want to achieve something that doesn’t mean it’s going to happen but maybe you can get close to it”

and now we have Inside Out (2015), a story which tells us “it’s perfectly okay to not be happy all the time. Sadness has its place”.

For those who haven’t seen the film I warn you there would be a lot of spoilers ahead. So I advise you to go watch the film and come back to this article.

For those of us who have seen it, Inside out tells the story of a girl called Riley, who is uprooted from her life in Midwest America when her father starts a new job in San Francisco. Like all of us, Riley is guided by her emotions – Joy, Fear, Anger, Disgust and Sadness all of which are characters that live inside her head in a place called Headquarters, the control centre inside Riley’s mind, where they help advise her through everyday life. As Riley and her emotions struggle to adjust to a new life in San Francisco, turmoil ensues when her emotions Joy and Sadness goes missing leaving the rest of the emotions to best to navigate a new life in the city, a new house and a new school.

The film opens on Riley being born. Joy is the first to arrive at the helm of Riley’s mind, and its clear from the first moment that she loves to make Riley happy. But then Sadness shows up, and it’s obvious that the two will butt heads for the duration of the film. It isn’t even two minutes in to the film and you can already tell where things are headed. About 15 minutes in, Joy did something that confirmed your initial suspicions when she drew a circle around Sadness and told her to stay there. 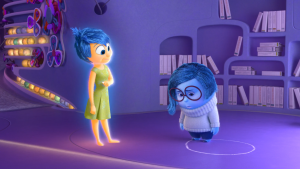 As can see despite this being a children’s film it deals with a lot of complicated adult themes.

So at this point, Riley has arrived at her new home and tried hard to hold up under the stress of everything. Joy is doing her best to make sure of that but that isn’t necessarily a good thing the other emotions aren’t coping well with the extensive environmental change. Fear doesn’t know what day to day life will bring anymore, Disgust hates the stuffy city, Sadness expects the worst, and Anger is straight up mad about the fact that they moved.

This is where the Pixar film does what I hoped it would do. It takes you back to your childhood, but not in the way you expected.

At some point of our lives, many of us moved schools, and if you didn’t, you still probably switched from primary to secondary school and to sixth form etc. It’s terrifying as a child. Its like your whole world is falling apart. 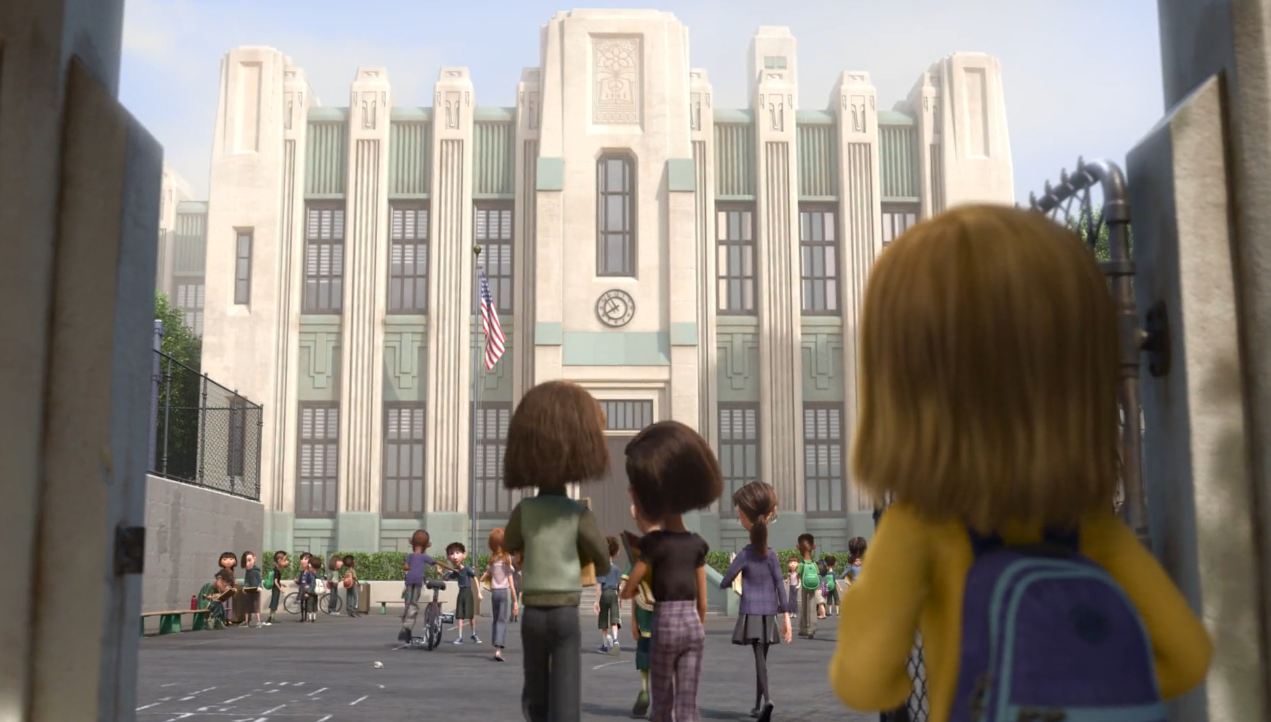 This causes the emotions in her head to go into chaos, with a core memory now being one of sadness. It’s at this point that Joy and Sadness, in their struggle, are sucked into a memory tube and carried out of Headquarters, leaving the other emotions to keep Riley going.

It’s at some point in Adolescence that we are thrust into an unfamiliar situation. Some have rougher childhoods than others, and some have better childhoods like Riley’s. Riley has  loving parents, great friends, and a passion for something. In this case it was hockey. She is a kid that’s had a fairly smooth life so far, and this is the first big bump in the road for her. As kids, with have such little life experience, we don’t know how to react, and like in Inside Out, we don’t know how we’re supposed to feel.

My secondary school years were rough, and for me that snowballed into my adult life. I kept suppressing my own sadness; thinking crying was a weakness and that I should always try to be happy. But by the time I realized I wasn’t happy, I had become depressed. And I didn’t feel anything at all anymore. Riley is heading down much the same road through the rest of the movie, with the things that meant so much to her not seeming to matter anymore. One by one, the islands fall off. Goofball island, her sense of humour. She feels she’s lost her friends, then her passion of hockey, her honesty, and lastly, her family. Throughout the film, it’s basically a race against the clock for her emotions to save her before she falls into depression. 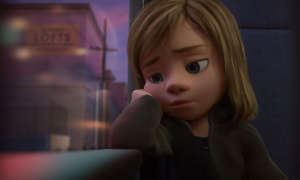 It’s a horrifying moment when Anger, Disgust, and Fear realise that this is happening. Riley is feeling empty as she runs away from home, feeling she’s lost everything that matters to her. But during their journey back to Headquarters, Joy has come to the revelation that Sadness does have a purpose. That during a stressful time, a person just needs to have a moment to be sad. It’s not a bad thing, it’s a necessary thing and more often in times of sadness, others will empathize and be there for the one who feels it.

As a child, this can be hard to understand. As an adult looking back at my life is at times of sadness where I am shaped by my experiences, I am a stronger person because of it. It’s all part of growing up.

Pixar took a situation that is rather common and troublesome for children, and turned it into a fantastic film.

I can’t even begin to cover the complexity of this movie. One of the most interesting characters of the film was Sadness. The film showed us that Sadness is necessary to show empathy. As in, happiness is great and all but in order to form a deeper bond with people, a deeper understanding of the world, sadness is a very necessary emotion. 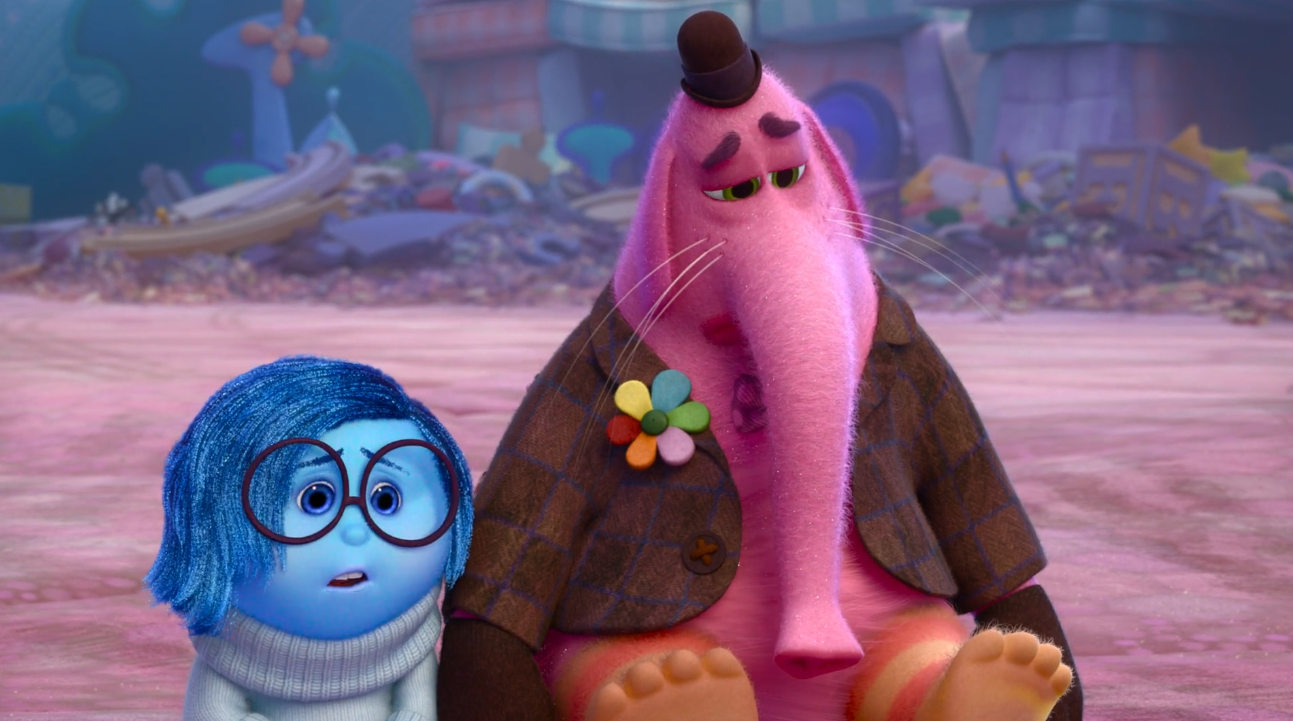 The film initially depicts Sadness as an emotion that people feel but which doesn’t really have a purpose, as seen when Joy narrates to us that she doesn’t know why Sadness exists. But as the story goes along, we see that Sadness helps Riley when she has problems that she can’t solve on her own because when she’s sad, other people can support her. It’s first hinted at when Sadness comforts Bingbong after his rocket is thrown away: she sympathises with him and that allows him to work through it and move on. Really the true purpose of Sadness is to evoke empathy through compassion, both for other people and for the self.


Inside Out (2015) made this really interesting distinction between depression and sadness. The main character Riley starts to fall apart due to the absence of both Joy and Sadness and when darkness starts to sweep across the control panel, I saw that as a metaphor for depression, as well as when Joy says something along the lines of, “If we can’t get back to headquarters she won’t be able to feel anything anymore”. Pixar’s depiction of depression was a lack of emotion rather than too much sadness.

Inside Out is one of those films where there’s so much going on that you’ll have to watch it multiple times to catch everything. I spent a lot of time thinking about how to discuss this film. On the whole this was a great little film. I loved the humour of the bubble gum song, through out the film and the world inside Riley’s mind was fantastic and complex. All throughout the film I felt as though I was seeing something I hadn’t seen before.

I thought Inside Out (2015) was a really good film but I wouldn’t put it in my top 3 Pixar films of all time but I believe that Inside Out (2015) is probably one of the most important films Pixar has ever made, one that makes it okay to talk about emotions, and gives its audience to an entirely new vocabulary for doing so. I love how nonchalantly they convey the value of disgust and anger, and the distinction they drew between sadness and depression. I don’t believe this would be the film I’ll show my future children why Pixar’s amazing. This would be the film to teach them why it’s okay to cry. 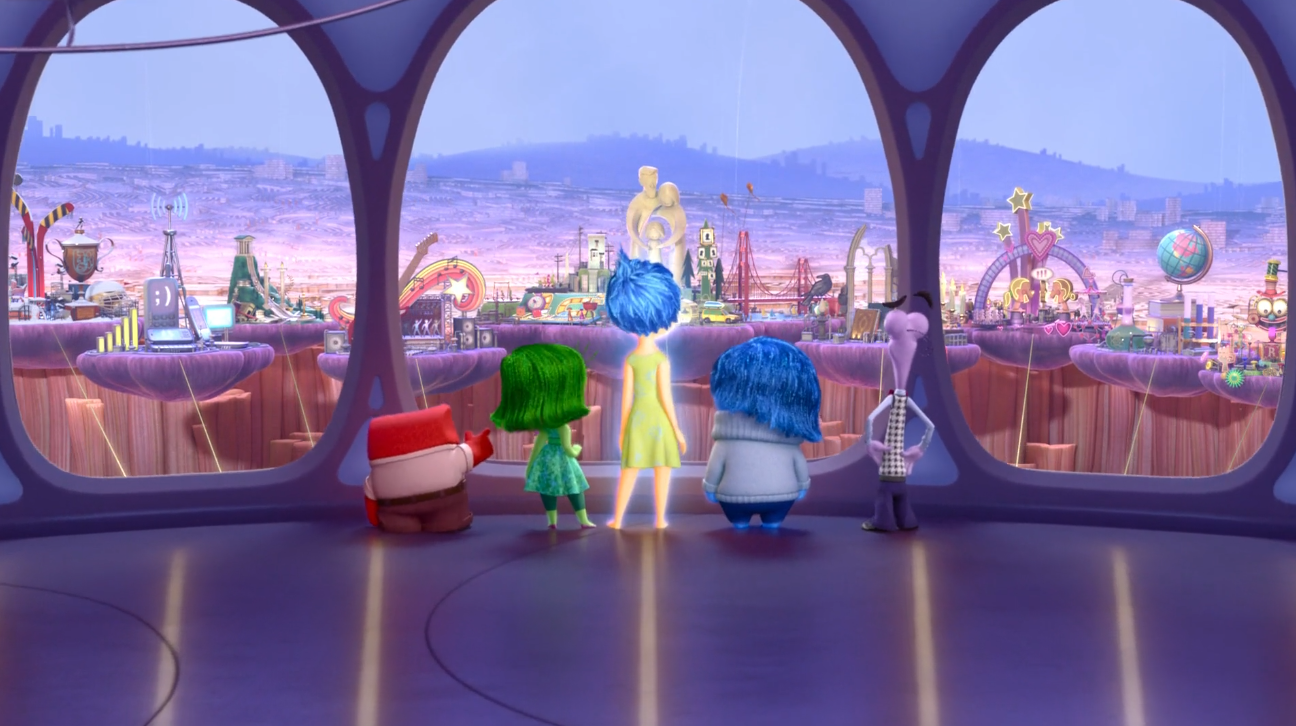