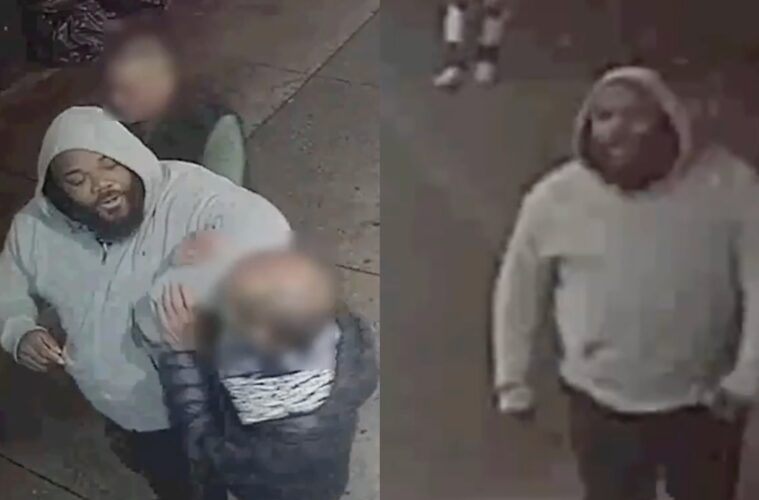 Racist mocks elderly men for speaking Cantonese, punches one in the face

Brooklyn detectives are asking the public's help to identify the suspect

A racist man in Brooklyn is wanted by Brooklyn detectives for attacking three Asian men.

The incident occurred in front of a restaurant at 6418 20th Ave. in Bensonhurst.

One of the Asian men confronted him but was punched in the face by the racist, who displayed a knife and sprayed the three of them with pepper spray.

Video footage shows the suspect being pulled away before fleeing along 20th Avenue.

All three victims were brought to Maimonides Medical Center for treatment of minor injuries.

Police described the suspect as a heavy-set, bearded Black man between 25 and 35 years of age, weighing between 220 and 225 pounds, who was last seen wearing a gray hooded sweater, dark-colored pants and black sandals.

Anyone with information regarding the perpetrator’s whereabouts can call Crime Stoppers at 800-577-TIPS (for Spanish, dial 888-57-PISTA). You can also submit tips online at crimestoppers.nypdonline.org, or on Twitter @NYPDTips. All calls and messages are kept confidential.

3 Asian male victims were talking to each other in Cantonese in front of 6418 20th Avenue when an individual mocked the way they spoke. When one of the victims confronted him, suspect punched him in the face then sprayed the three victims with an unknown substance. Suspect fled. pic.twitter.com/fzAsrrPTGD