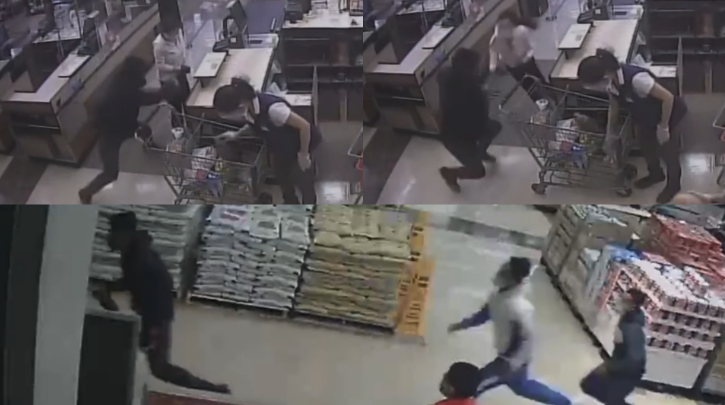 The three suspects are described as black men in their 20s

Two Asian women had their purses violently snatched at a San Gabriel market.

Police are on the hunt for three suspects who were caught on camera running out of a San Gabriel market after one of them was seen robbing a woman.

The incident occurred at 840pm on Saturday inside 99 Ranch Market in an Gabriel Square.

CCTV footage shows an Asian woman waiting at the checkout when a male attacker approaches her from behind and snatches her purse.

As he pulls on it, the victim falls to the ground and is dragged for a couple of feet. The victim suffered cuts on her face, arm and leg.

Along with two other assailants, the attacker runs out of the store.

Another woman was reportedly robbed by the same group in the parking lot.

Both victims were Asian women in their 40s and both had their purses stolen.

The three suspects are described as black men in their 20s.

Those with additional information about the robberies are asked to call the San Gabriel Police Department Detective Bureau at 626-308-2835.

In other news, a victim of anti-Asian hate and her daughter have been honoured by throwing the first pitch at the New York Yankees stadium.