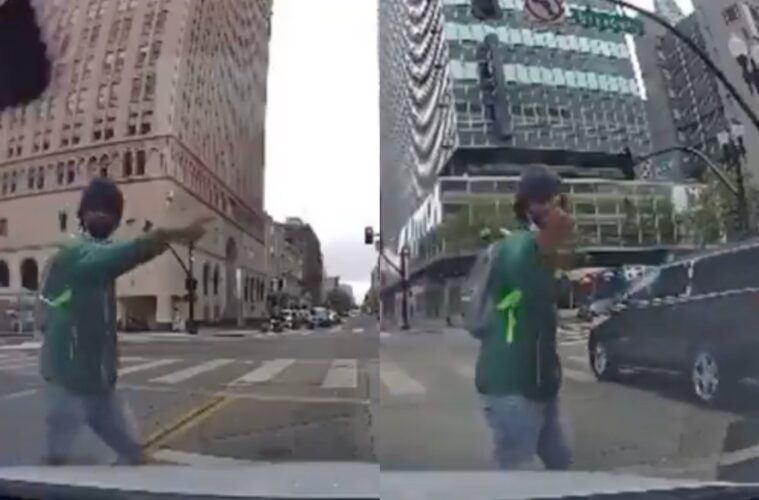 “It was terrible. I had a meltdown at work"

A man was caught on camera spitting at a pregnant Asian woman in Oakland.

The incident occurred when the pregnant woman and her husband were driving to work on Friday at 8:25am.

In the East Bay, a man could be heard spitting in the face of a pregnant woman, Tina, at a red light. When the couple stopped at a red light, the man approached their car and spat at the woman.

“He was just circling our car trying to talk to my husband to get out but being pregnant, I didn’t want to put us and my baby at risk,” Tina said.

In the video, Tina can be heard telling her husband not to get out of the car. Tina, who is 7 months pregnant immediately took a COVID test following the incident.

“It was terrible. I had a meltdown at work,” she said. “Right when I got to work I washed my face, I did an eye wash, I made sure nothing was on me and then I spoke to my providers, you know I had a mini melt down.”

“After he was yelling at us and shouting at us and that’s when I felt like this was because we were Asian and because our windows were down it was a perfect time to target us,” Tina said.

“I work in Oakland, downtown Chinatown and I see grandmas and grandpas every day coming in you know to our clinic because of the same reasons,” she said.

“Now is the perfect time to stand up for ourselves we have to advocate for ourselves so I hope this helps others to do the same.”

In other news, police are searching for a driver who killed one pedestrian and injured four others.

A man spits into the eyes of a pregnant Asian woman at a red light in downtown Oakland and then uses a gay slur as he asks the victim to get out of the car. Video sent to me by the victim. @TaylorBisackyTV @AmandaHari @KRON4Desk @KTVUdesk @KGOdesk @AzenithKTVU @nbcbayarea pic.twitter.com/VW9qNdRgbI