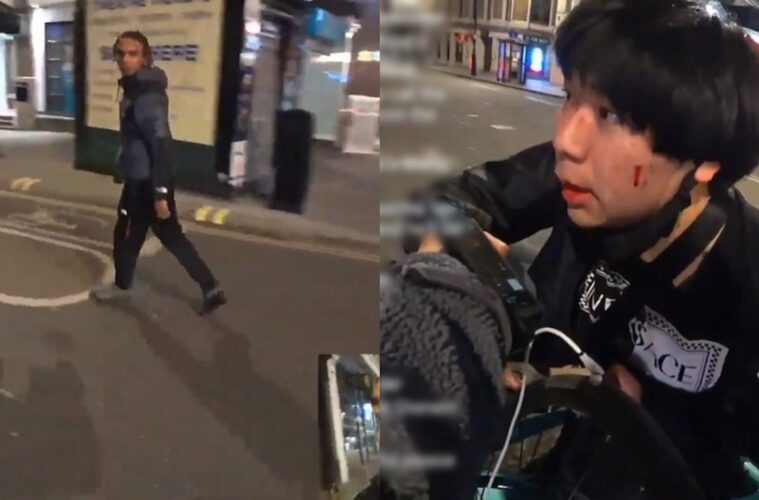 ‘Leave him alone!’: Live-streamer intervenes as Asian man is attacked in London

"He was kicking him, he tried to curb-stomp him"

A live-streamer captured the moment he intervened as an Asian man was attacked in London.

The streamer, who goes by the name of Sherwin, videoed himself running towards the victim shouting “what’s going on?!”

Sherwin then sees the attacker and screams at him, “leave him alone!”

As the attacker tries to lunge at the victim again, Sherwin circles around and chases him away.

The victim, who is lying on the ground tangled with his bike, pleads with Sherwin, “call the police.” Cuts and wounds can be seen on the victim’s face.

Whilst Sherwin is assisting the victim, the attacker once again tries to instigate another attack but is deterred as more people crowd around, eventually causing him to flee the scene.

Sherwin calls the police and hands his phone to the victim, whilst explaining to people around him that “he was kicking him. He tried to curb-stomp him.”

Commenters on Sherwin’s YouTube channel praised the streamer for his bravery.

“He did not hesitate for a second. Fkn legend. You should feel proud, as ur family. Thank you brother,” commented one person.

“Sherwin, you went straight for the scene without a thought for yourself and scared off a guy with a knife. It was your unhesitating courage that made the predator drop his prey,” another said.