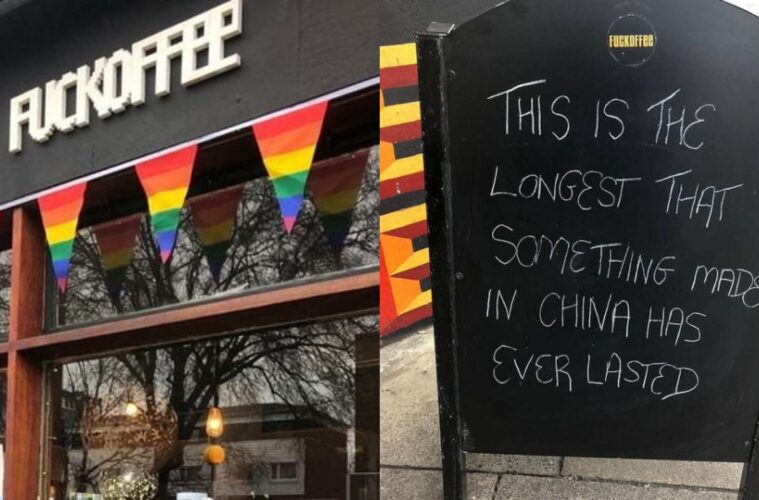 "As a black person, I saw this as satirical and mocking the stereotypes"

FUCKOFFEE cafe has apologised for displaying a sign that many deemed to be racist.

The London coffee shop, located in Bethnal Green, posted an image of the sign displayed outside their cafe on Instagram.

“This is the longest that something made in China has ever lasted,” the chalkboard message read, referencing Coronavirus.

“What the hell is wrong with you?” Wrote one commenter. “How on earth did your manager approve this and why the fuck have you posted it to Instagram? Do you actually want to publicise that you are racists?”

FUCKOFFEE has since issued “Social Media Announcement” on Instagram, apologising for the message.

“I would like to take this opportunity to apologised for any racially sensitive imagery that has been posted on behalf of FUCKOFFEE,” the post reads.

“I take full responsibility,” it continues. “As a black person, I saw this as satirical and mocking the stereotypes with which society stigmatises us.,”

“My perspective is not yours, and you should not be forced to view it. I will stress that our humour may cut close to others’ sensitivities, but at no point does it emanate malicious intent.”

Instagram users far from accepted the statement as an apology.

“The post IS racist. That’s taking ownership and responsibility is half way to an apology,” another stated.

“Educating and correcting yourselves as an organisation is the next. The post was up since January and wasn’t deleted until recently due to the overwhelming feedback. This shows a lack of awareness to racism in the UK. As a Asian British raised in East London, I am offended by this apology and more so that I’ve been informed your organisation is run by a white person. His statement is still pending.”

“A white man literally owns this business. This isn’t an apology,” said another.

“Abysmal apology. Educate yourselves before you pull the race card on your internalised xenophobia,” one person said.

“Lame AF overpriced chain trying to gain publicity at the cost of others,” another added.

In other news, Japanese tennis star Naomi Osaka is launching a skincare line for people of color.