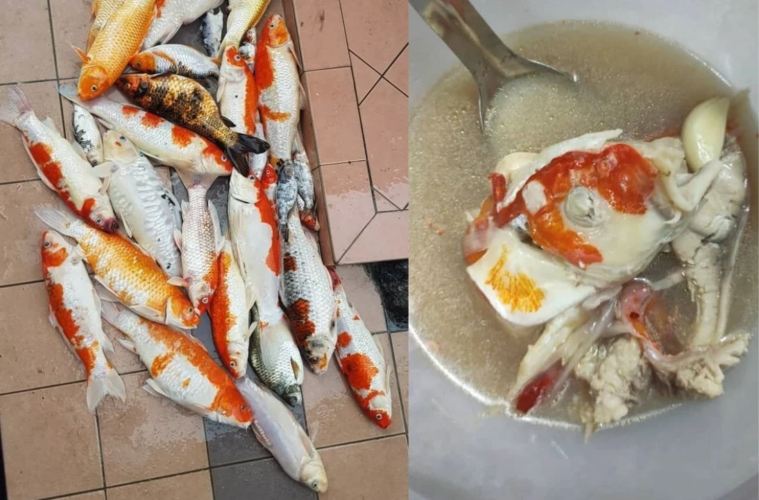 A Malaysian woman has divided the internet after turning her dead pet koi into fish soup.

Amanda Omeychua posted images of her meal in a Facebook group with 2 million members called ‘Masak Apa Tak Jadi Hari Ni’, which translates to ‘Cooking Fails Of The Day’.

Omeychua’s six images showed two dozen colourful dead koi on the floor. She explained that the fish had died from a lack of oxygen after a tap was left to refill the pond.

“The pool man accidentally drained my fish pond and in an hour or two, the dead koi started smelling so bad,” she wrote. “How can she cook it? You also do not know what koi eat. Most of all, how can you eat your pet?”

The travel blogger said she used the fish to make a meal using a “traditional recipe for a king,” stating the koi “tasted like catfish”.

Over 4,500 commented on the images with many expressing their disapproval.

“I wouldn’t be able to bring myself to eat my own pet,” said one. “I would just bury them.”

On Twitter, others shared similar views. “I recall naming your pets makes a great distinction when an animal will stay a pet or eventually become food. I guess this person has went past that,” one person tweeted.

However, some highlighted how similar dishes were served at various restaurants across Malaysia.

Nonetheless, Omeychua defended her decision to cook her koi.

“I cook and eat all fish that died in a good way. In my hometown, we eat pufferfish too. Sometimes my family and neighbours would cook pet fish, just that it is not as expensive as mine,” said Omeychua.

“I have given half of the dead fish to my brother. He has eaten it with his son, who said it tasted delicious.”