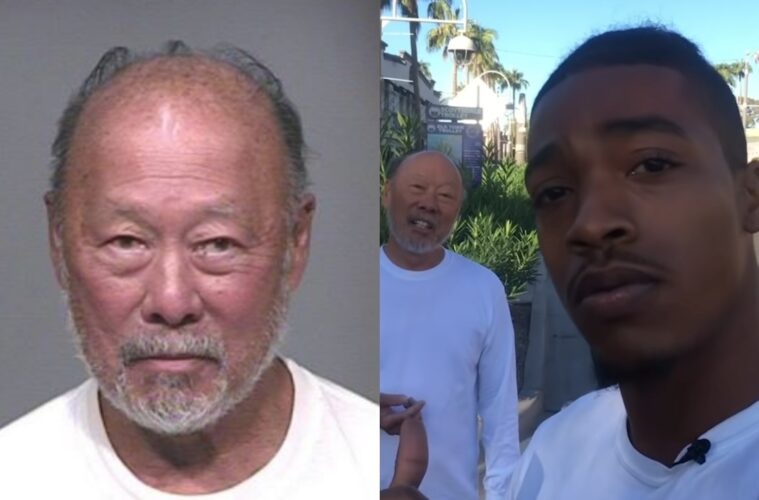 ‘No n*gger zone’: Racist Asian realtor gets fired and arrested for disorderly conduct in Arizona

An Asian realtor has been fired and arrested after spewing racist hate towards an African American man according to AsAmNews.

Paul Ng of Scottsdale, Arizona, was filmed by LilAJDre telling him he did not belong there. LilAJDre AKA Dre posted the video on YouTube.

The exchange begins calmly with both parties enquiring about what the other is doing.

“Why are you coming over here?” Dre asks Ng in the clip.

“I just want to see what you guys are taking pictures of,” Ng replies.

“Why’s it your business?” Dre questions.

“Mine too, I live in Scottsdale, why are you taking pictures of me?” Dre states.

“I don’t care, you don’t know me,” a frustrated Dre says. “Do you know a lot of white men are doing racist things in this world?”

“That’s fine, why are you here?” Dre asks again.

“Because this is a no nigger zone,” Ng states shamelessly.

Ng, who worked as a realtor for Russ Lyon Sotheby’s, International Realty and has since been fired.

“A video was posted to social media showing one of our agents, who is an independent contractor, demonstrating severely racist behavior. Upon learning of this video we took immediate action in severing his license and condemning his abhorrent behavior,” the company said in a statement.

“Russ Lyon Sotheby’s International Realty does not and will not tolerate racism or discrimination of any kind. Period.”

In an interview with the police, Ng admitted using the ‘N’ word and“implied that Black people do not belong in the area.”

Ng also condemned the BLM movement and Antifa, claiming someone threw a large rock through the window of a business and stole $80,000 in merchandise.

He said he has since kept an eye out for “suspicious individuals”. Ng said he was suspicious of Dre because of his Michigan plates and expensive camera.

In other news, an Asian American mother was given a racist letter and had her home vandalized in San Francisco.

Oh wow the gentleman who made the very racist comments is a realtor. I wonder how many people he may have discriminated against? 🙍🏾‍♀️ . Regardless he has been fired and hopefully he can learn from his terrible mistake(s).~FOXX🦊. . Repost @racistandunemployed ・・・ ⚠️UPDATE⚠️ Leave reviews on his realtor profiles forewarning of this self proclaimed racist and his behavior. His license needs to be revoked: Arizona Department of Real Estate (602)771-7700 Ethics: http://www.aaronline.com/ National Assoc. Realtors Call to report: 800-874-6500 Email to report: ContactNAR@realtors.org Tweet on Twitter: National Association of REALTORS® @nardotrealtor