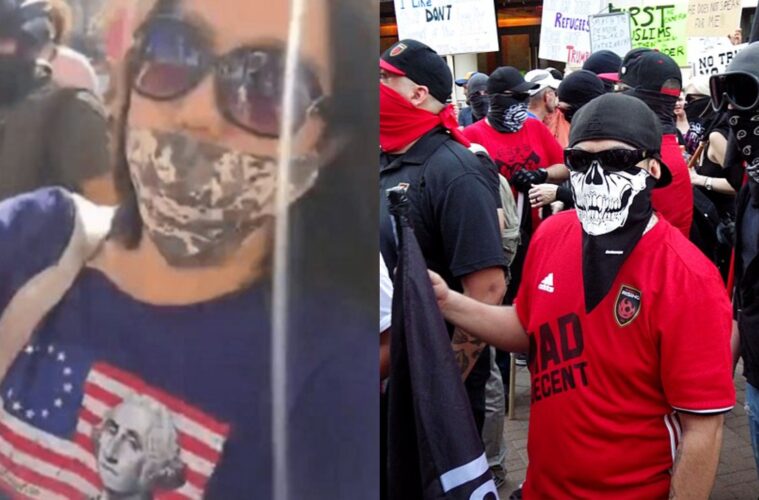 "Asian Trump supporters should be shot for treason on November 4!”

As reported by Asian Dawn, an Asian woman was mobbed by Antifa during a counter-protest in San Francisco on Saturday.

Conservative group Team Save America had staged a ‘free speech’ rally. Held in front of Twitter’s Market Street HQ, the group were protesting against Twitter which blocked the New York Post’s story of Joe Biden’s involvement with his son’s Ukraine and CCP connections.

One conservative Asian woman who was wearing a T-shirt sporting the US flag was also mobbed.

“Asian whore!” One Antifa member shouted at her, whilst others spewed more racist slurs.

Some activists reportedly shouted “Asian Trump supporters should be shot for treason on November 4!”

In other news, President Donald Trump is gaining support from Asian American communities.

SAN FRANCISCO, California—A free speech demonstration staged by conservative activists quickly turned violent in downtown San Francisco on Saturday, October 17, after several hundred liberal-Democrats and Antifa rushed the area, outnumbering the conservatives. Multiple conservatives were attacked and injured, according to CBS SF BayArea. . The event was organized by Team Save America to protest Twitter after the media giant blocked the New York Post story of Joe Biden’s involvement with his son’s Ukraine connection and business dealings with Chinese Communist Party organizations. Emails released prove Joe Biden was directly involved. . The confrontation took place in front of Twitter’s Market Street headquarters. Members of the conservatives wore red “Make America Great Again” Trump campaign hats, carried pro-police “Thin Blue Line” flags, U.S. flags, and wore U.S. flag T-shirts. . “Two of them were Black men, which is always really confusing to see someone who’s been brainwashed into that,” Demitria Ruiz, a liberal-Democrat stated to CBS SF BayArea. . One Asian woman on the conservative side was quickly surrounded by Antifa and lambasted for wearing an American flag T-shirt. Members of the crowd called her an “Asian whore” while others screamed other racial obscenities. . One Caucasian man told CBS SF BayArea as paramedics were wheeling him into an ambulance, “I’m a Trump supporter. They assaulted me!” “They chased me, they kicked me for no reason,” said Trump supporter Marc Solorzano who suffered a leg injury. “I’m from a Latin home. I married a Mexican woman. They kicked me for running—I was running from them!” . African-American Trump supporters were also specifically attacked by members of Black Lives Matter. . “All dressed in black, I think he might be Black Lives Matter (activist), hit me in the back of the head, knocked me down. I got up. The security guards ran him off and they told us to go over here,” Derrick Main, a Trump supporter told CBS SF BayArea. . Some Black Lives Matter activists screamed “All Black, Latino, and Asian Trump supporters should be shot for treason on November 4!”